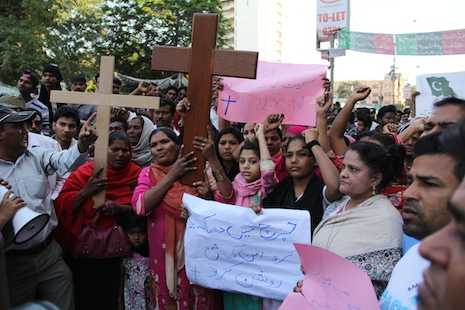 Christians protest in Karachi on Sunday following the bombing of two churches in Lahore (Credit: ucanews.com)

Some 5,000 Christians rallied in the Pakistani city of Lahore Monday, blocking roads and shouting anti-government slogans in a second day of protests against twin Taliban suicide bombings of churches that killed 15 people and left dozens wounded.

The deadly blasts took place simultaneously outside St John Catholic Church and Christ Church in Youhanabad, an area home to more than 130,000 Christians.

He said suicide bombers blew themselves up outside the churches after being challenged by security officials.

“The whole nation shares the grief of our Christian brethren and an investigation has been started into the incident. Persons involved in this conspiracy will soon be taken to their logical end,” Khanzada said.

“Had they entered the churches, they would have caused massive devastation considering around 800 worshippers, including women and children, were inside,” he said.

The Pakistani Taliban's Jamaat-ul-Ahrar faction described the blasts as suicide attacks and vowed to continue their campaign for the enforcement of Sharia Islamic law, in a statement emailed to the media.

Shortly after the blasts, thousands of enraged Christians blocked roads, vandalized a bus station and lynched two men suspected of being accomplices of the attackers.

In Karachi on Sunday, protests were held at Essa Nagri, Qayumabad, Shara-e-Faisal and other areas. Around 300 demonstrators gathered at the press club, condemning the Nawaz Sharif government and calling for arrest of those responsible for the attacks.

“We strongly condemn this inhuman attack on the Catholic Church, in which many Christians have been martyred,” said Pastor Amjad Farooq, founder and head of Faith Prayer Ministries, an evangelical and humanitarian organization.

“We demand that the governments of Punjab and Islamabad rein in terrorists, who are carrying out attacks with impunity,” he said.

Civil society and rights activists also held a vigil at Numaish Chowrangi in Karachi to express solidarity with the families of victims.

“We condemn the events, which have taken place at Youhanabad in Lahore. This is not something human beings are supposed to do,” said Fr Diego.

He said all missionary schools in Pakistan would be closed on Monday in protest against the terrorist attacks. Salim Michael, a member of the Catholic Church’s human rights body, the National Commission for Justice and Peace (NCJP), lamented that neither federal nor provincial government had paid any heed to a Supreme Court ruling calling for security to be provided at places of worship for minority communities.

“We would not have seen this day if the government had done its job,” he said.

Protests were also held in Hyderabad, Faisalabad, Multan, Peshawar and other cities. The governments of Punjab and Sindh provinces announced a day of mourning on Monday.

In a press statement, the NCJP criticized both the federal and provincial governments for ignoring pleas for better security and called on them to improve safety measures for churches and religious minorities in Pakistan.

The church administration of Youhanabad pleaded with the government and police for security after being threatened on a number of occasions … but minimum security was provided, the NCJP said.

As a result of this negligence, many Christian people have lost their lives and their loved ones, the statement said.

“We as a nation need to stand with the families of the victims and stop extremism jointly; this misuse of religion as an excuse to kill minorities should be stopped. We demand that provincial and federal government take serious and effective measure[s] to protect minority community of Pakistan.”

Meanwhile, in a message to the Christian community, Prime Minister Nawaz Sharif said bombings constituted attacks on the state of Pakistan.

"Our Christian community has rendered invaluable services to the motherland particularly in the social sector and we look upon them with honor and pride," a press release quoted the Prime Minister as saying.

“The emotions of anger and grief shown by the Christian community in the aftermath of this tragic incident have strengthened the government's resolve to counter the menace of terrorism,” he said.

Pope Francis also condemned the two suicide attacks and accused the world of "seeking to hide" the persecution of Christians.

"It's with pain, much pain that I was told of the terrorist attacks against two Christian churches in Lahore in Pakistan, which have caused numerous deaths and injuries," the pope said after his weekly Angelus prayer in Rome on Sunday

"I implore God ... that this persecution against Christians — that the world seeks to hide — comes to an end and that there is peace," he added.