Church to use its own billions to block excessive payouts 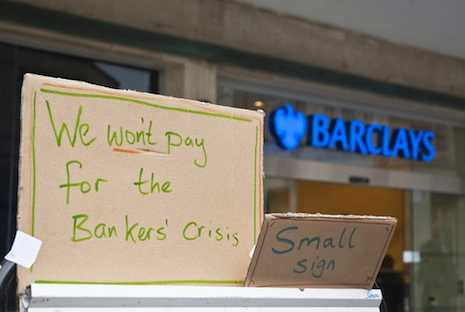 By Victoria Ward for The Telegraph

The Church of England has accused Barclays [Bank] of having “repeatedly let down society” and urged the bank to make a determined effort to introduce a “fundamental turnaround” in its culture.

It said it had commenced “intensive engagement” with the company and would be assessing its progress in July, a year after the Libor interest rate rigging scandal, for which it was fined £290 million.

The Church, which is a Barclays shareholder, said in its annual investment report that it had sought “robust assurance that, having repeatedly let down society with its conduct, Barclays is making a determined and successful effort to effect a fundamental turnaround in culture”.

Andrew Brown, secretary to the Church Commissioners who manage the fund, told the Financial Times that the talks with Barclays were proving “fruitful”.

The commissioners, who manage a £5 billion endowment fund, also said that shares in publishing group News Corp were sold "after a year's engagement which failed to allay our concerns about the governance of the company".

The Church recently launched a major offensive against bonus culture in the City pledging to use its own multi-billion investments to attempt to block what it sees as excessive payouts.

Last month, its Church’s Ethical Investment Advisory Group (EIAG) issued an outspoken attack on what it called a “culture of entitlement and greed” among the highest paid as it set out a list of demands which it will seek to implement in companies in which it owns shareholdings in the coming AGM season.

The document was said to reflect the wider critique of the excesses of the City espoused by the Archbishop of Canterbury, Justin Welby, who once wrote a book called “Can Companies Sin?”

It argued that bankers and City executives should not be paid more than 100 per cent of their salary in bonuses – other than in very special circumstances where a director is shown to have delivered “extraordinary results through exceptional performance”.