Anglicans are "on the edge of a precipice" says leader 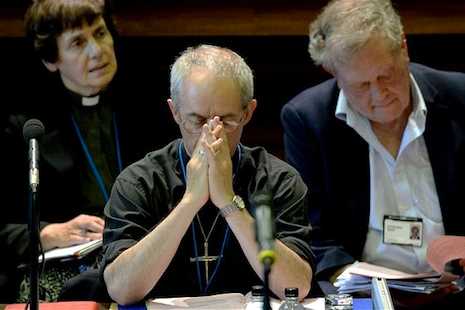 By John Bingham for the Telegraph

The Archbishop of Canterbury has issued a dramatic warning that the worldwide Anglican church is tottering on the brink of complete disintegration amid bitter disputes between liberals and traditionalists.

In his most stark comments yet about divisions over issues such as homosexuality, the Most Rev Justin Welby said the Church is coming perilously close to plunging into a “ravine of intolerance”.

He even drew parallels between the crisis afflicting the 77 million-strong network of Anglican churches and the atmosphere during the English Civil War.

And he likened the collective behaviour of the church to a “drunk man” staggering ever closer to edge of a cliff.

Yet he added that many of the issues over which different factions in the church are fighting are simply “incomprehensible” to people outside it.

His comments came during a recent sermon in Monterrey, Mexico, which he was visited as part of a plan to travel to every province of the Anglican Communion at the start of his ministry.

Full Story:‘On the edge of a precipice’ – Welby’s doomsday warning to feuding Church