Archbishop of Canterbury Justin Welby kneels to pay homage to victims of the Easter Sunday attacks at St. Sebastian's Church in Katuwapitiya in Negombo on Aug. 29. (Photo by S. Ganasiri)

Archbishop of Canterbury Justin Welby, head of the Anglican Church, has mourned victims of the Easter Sunday suicide bombings on a visit to Sri Lanka.

He called for unity in Sri Lanka as he started a three-day solidarity visit that included a trip to St. Sebastian's Church, where he met families of victims of the attacks on Aug. 29.

"The survived statue of the Risen Jesus with human blood made me think of your deep faith, your courage and your love," said Archbishop Welby, pointing to the statue kept in a glass case at the church in Katuwapitiya in Negombo. "Christ is not far from us.”

Archbishop Welby bowed down at the spot on the glass-covered tile floor where the bomb exploded. The church has preserved the place as a memorial.

"When I heard about the terrible attack on Easter Sunday morning, we prayed and kept silence for our brothers and sisters," said Archbishop Welby, the spiritual head of a Church with about 85 million members spread across 105 countries.

He attended a prayer service with Cardinal Malcolm Ranjith of Colombo and families of victims. He also made a courtesy call on Prime Minister Ranil Wickremesinghe and opposition leader Mahinda Rajapaksa.

"I pray for you and I believe that you all can feel it," he said. "I have no words to comfort you."

The attacks on three churches — St. Sebastian’s Church, St. Anthony's Shrine at Kochchikade in Colombo and the evangelical Zion Church in Batticaloa — and three luxury hotels killed 259 people and injured hundreds on April 21. Archbishop of Canterbury Justin Welby presents a gift to a boy related to a victim of the terror attacks at St. Sebastian's Church on Aug. 29. (Photo by S. Ganasiri) 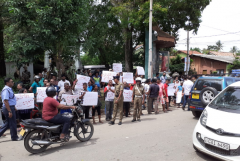 The government and its security agencies have been criticized for not acting to halt the attacks after receiving intelligence warnings weeks earlier.

A parliamentary commission was also appointed to investigate failures despite objections by Sirisena after political parties, officials and religious leaders criticized the shortcomings of the president, who is also the defense minister.

Cardinal Ranjith has accused government-appointed committees of lacking transparency and impartiality. He has called for an independent cross-party commission to investigate the attacks.

Anglicanism was introduced to Sri Lanka in 1799 and the country has two Anglican dioceses, Colombo and Kurunegala.