Unknown whether Archbishop of Canterbury will raise issues of Christian persecution 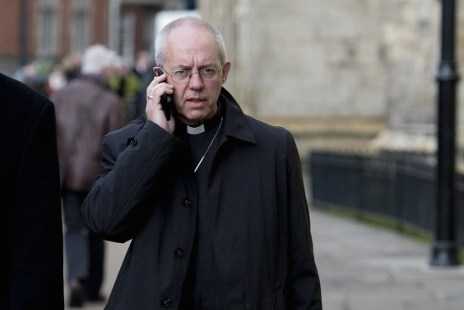 The Archbishop of Canterbury Justin Welby met with a top Chinese political advisor Thursday as the head of the Anglican Church began a subdued visit to China amid the worst persecution against Christians there in a generation.

During talks in Beijing with Yu Zhengsheng, a member of the Politburo, the archbishop called for stronger cooperation between Chinese and British churches, according to the state-run Global Times.

“Chinese citizens’ freedom of belief and the religious circle’s legitimate rights and interests are protected by law,” Yu was quoted as telling the archbishop.

Following a speech at Peking University today, the archbishop was on Saturday due to head to Shanghai to visit St Ignatius Catholic Cathedral before continuing on to Nanjing for the last leg of his tour ending on June 5.

Archbishop Welby was not scheduled to visit nearby Zhejiang Province where authorities have removed nearly 500 crosses and destroyed at least 35 Christian churches over the past 18 months.

“I don’t think we are [going to visit Zhejiang],” the archbishop’s Director of Communications Ailsa Anderson told ucanews.com Friday. “We’re very much in the hands of SARA (the State Administration for Religious Affairs) and the British Embassy in terms of where we are going.”

Predecessor Rowan Williams gave a press conference in the grounds of the British Embassy in Beijing at the end of his October 2006 visit to China in which he spoke of raising religious persecution directly with senior Chinese officials.

Archbishop Welby has no arranged media events, and it remained unclear whether he would address sensitive issues with Beijing amid what groups such as China Aid have called the country’s worst persecution of Christians since the Cultural Revolution.

“We will have to see what is raised when the visit continues,” said Anderson who is traveling with the archbishop. “It’s his first visit to China … so it’s very much a fact-finding, information-gathering, relationship-building visit.”

A Protestant community in Zhejiang told ucanews.com they had hoped to show the archbishop churches where they had re-erected crosses that had been being forcibly removed by provincial authorities, according to a laywoman.

“The visit is pure propaganda,” said the source, who declined to be named for security reasons. “I feel that the archbishop is being used [by the government].”

Unlike the Vatican, which is currently engaged in difficult negotiations with Beijing on bishop appointments, the Anglican Church has no say over any facet of how China’s 60-million strong Protestant community is organized.

Archbishop Welby is the most senior international Protestant figure to visit China since his predecessor nearly nine years ago and the fourth Archbishop of Canterbury to visit the country.

“I am very much looking forward to my first visit to China, and seeing the remarkable economic developments and rapid growth of post-denominational Christianity which is taking place there,” Archbishop Welby said in a statement ahead of his visit. “I look forward to building on the friendship with the Christian church in China established by my three predecessors, as well as meeting representatives of other faiths.”