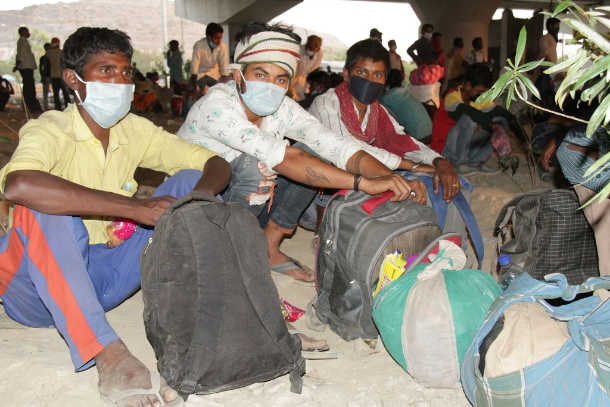 Migrant workers from Bihar wait to cross the Delhi-Uttar Pradesh state border at Ghazipur as they return home on May 16. (Photo: Bijay Kumar Minj/UCA News)

Church leaders, activists and political parties in India's capital say they are shocked by reports of migrant workers being sprayed with chemicals to disinfect them.

A video that went viral on social media on May 22 shows migrants queuing for medical screening outside a school in South Delhi before boarding a special train.

“We condemn the act and I feel sorry for migrant workers who are already under great stress returning to their native places to avoid Covid-19 and fighting hunger and disease,” Father Jaison Vadassery, secretary to the Conference of Catholic Bishops’ of India (CBCI) commission for migrants, told UCA News.

“Nobody in a civilized society will appreciate it. Whatever the reason, it is major shortcoming of the authorities who are responsible for such an act.

“When the entire world is fighting a deadly disease, migrant workers suffer the most because after the pandemic spread many lost their jobs, many became hopeless and were forced to return home. If society treats them like this, it is very unfortunate.”

Father Vadassery, former secretary of the CBCI’s labor office, was speaking against the backdrop of a report on May 22 that the South Delhi Municipal Corporation sprayed disinfectant on migrant workers in Lajpat Nagar during a sanitization drive.

This is not the first such case in the country. A video on social media showed health officials from the neighboring state of Uttar Pradesh spraying disinfectant on migrant workers on March 30.

On May 7, two employees of Uttar Pradesh’s Lucknow Municipal Corporation were suspended for spraying disinfectant on migrant workers at Charbagh railway station.

Father Vadassery said when Prime Minister Narendra Modi on March 24 ordered a national lockdown and asked people to stay inside their homes to contain the outbreak, this triggered a mass exodus of migrant workers who are now facing uncertainty.

Nicholas Barla, coordinator of Adivasi Samanwey Manch Bharat, an organization advocating tribal rights, told UCA News that the entire society "must condemn this inhuman act. How can they do this? It is unimaginable.”

“Migrant workers should be respected and cared for, especially during this time when they are more vulnerable,” he added.

The mass exodus of migrant workers from several states during the lockdown has become a humanitarian crisis, with hundreds walking along roads and railway tracks after ignoring government pleas to remain where they are.

On May 8 in the western state of Maharashtra’s Aurangabad district, at least 16 migrant workers were mowed down by a goods train while sleeping on a railway track, while at least 100 people have been killed in road accidents across the country.

The railways have so far run around 1,500 "Shramik Special" trains since May 1, ferrying over 1.7 million migrant workers from various parts of the country to their home states.