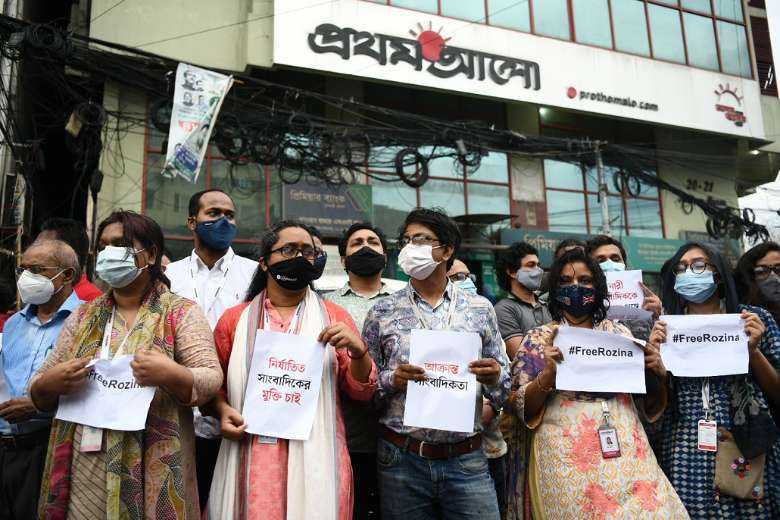 Journalists stage a protest to demand the release of Rozina Islam, a senior investigative reporter of leading Bengali daily ‘Prothom Alo’, in Dhaka on May 18. (Photo: Piyas Biwas)

A Catholic official has joined journalists, media watchdogs and rights campaigners to condemn and demand justice over the harassment and arrest of a prominent Bangladeshi journalist on charges of violating the British colonial-era Official Secrets Act.

Islam, 42, is known for her groundbreaking reporting against institutional corruption and exposing scams in the Health Ministry and elsewhere during the Covid-19 pandemic.

On May 17, Islam faced harassment including physical assault and was detained for about five hours in a room by Health Ministry officials at Bangladesh Secretariat in capital Dhaka. Photos and video on social media showed she fell sick during detention and nearly fainted.

She was then handed over to police and charged under the Official Secrets Act 1923, which warrants 14 years' imprisonment or the death penalty if convicted.

A state might have official secrets, but often officials don’t know the difference between public and secret information

She was produced before a court in Dhaka on May 18 and the judge denied her bail and ordered her to be sent to jail. A police petition for remand was also dismissed.

Father Augustine Bulbul Rebeiro, secretary of the Catholic bishops’ Social Communication Commission, condemned the harassment and arrest of Islam, terming it an attack on freedom of the press.

“It is unacceptable that Rozina Islam was unlawfully detained without any specific allegations. A state might have official secrets, but often officials don’t know the difference between public and secret information. This case shows how some officials can use the secrecy law on their whim and attempt to curb freedom of press,” Father Rebeiro told UCA News.

“The case of abuses and arrest of Rozina Islam is surely a threat to investigative journalism. One can easily understand what can happen to journalists from other or smaller media outlets if a prominent journalist from the country’s most influential media faces such harassment.”

The harassment and arrest of Islam triggered widespread condemnation at home and abroad, both on the streets and online.

Hundreds of journalists in Dhaka and elsewhere defied scorching heat and sudden rain to form human chains to demand justice and the release of Islam. Journalists, free thinkers and rights activists made strongly worded posts on social media.

On May 18, journalist unions boycotted the regular press conference of the Health Ministry in a gesture of protest.

The Editors’ Council, the apex body of newspaper editors, issued a statement terming the abuse and arrest of Islam “a black chapter in the history of journalism in Bangladesh.”

“The Editors’ Council has been observing with deep concern that a case has been filed against Rozina Islam under the Official Secrets Act of 1923. The filing of a case against a journalist in this era under an act formulated during British rule is the manifestation of the negative attitude and the evil mentality of the authorities concerned to gag newspapers,” the statement said.

The New York-based Committee to Protect Journalists (CPJ) demanded the immediate release of Islam and urged the government to stop harassing journalists under repressive laws such as Official Secrets Act.

“We are deeply alarmed that Bangladesh officials detained a journalist and filed a complaint under a draconian colonial-era law that carries ridiculously harsh penalties,” said Aliya Iftikhar, the CPJ’s senior Asia researcher.

“Bangladesh police and authorities should recognize that Rozina Islam is a journalist whose work is a public service and should immediately drop the case against her and allow her to go free.”

For years, Bangladesh has seen a decline in press freedom and attacks on journalists, muzzling dissent by force and legally through repressive laws by both the state and non-state actors. The crackdown has intensified in recently as journalists exposed massive corruption in the state’s response to the Covid-19 pandemic.