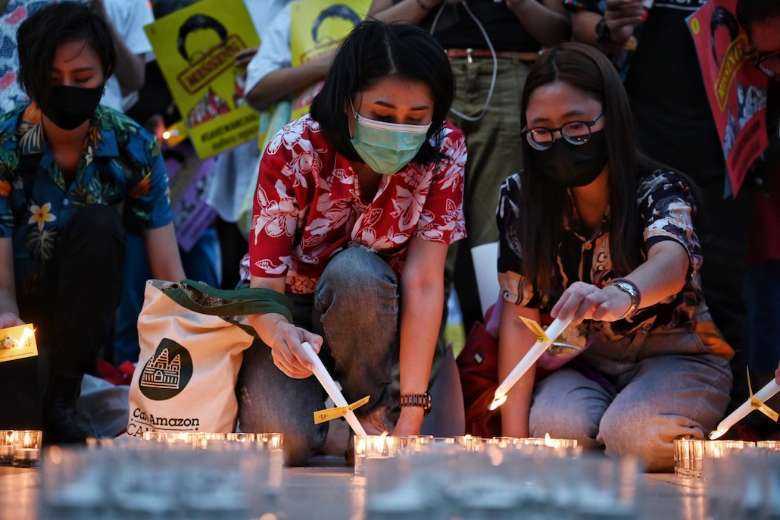 Pro-democracy supporters and Sitanun Satsaksit (center), sister of Thai activist Wanchalearm Satsaksit who went missing in Cambodia in 2020, commemorate the first anniversary of his enforced disappearance with a candlelight vigil in Bangkok on June 4. (Photo: AFP)

Thailand has deported another Cambodian refugee afforded protection under the United Nations High Commissioner for Refugees (UNHCR) just 10 days after the authorities sent two other refugees who were tied to an outlawed local opposition party.

Gillian Triggs, UNHCR assistant high commissioner for protection, said in a statement that the Cambodian refugee was arrested on Nov. 19 and Thai authorities were immediately notified of the individual’s refugee status.

She urged the government not to return the individual to Cambodia over serious concerns for the safety of the refugee, who was not named.

However, the refugee was held at a detention center in Aranyaprathet overnight and then deported to Cambodia the following day, Nov. 20, and this had contravened the principle of non-refoulement, obliging states including Thailand not to expel or return people to a territory where their life or freedom would be threatened.

“We are extremely alarmed by this trend of forcibly returning refugees to Cambodia, where they face a serious risk of persecution,” she said.

“Given recent developments, we are very concerned about the safety of UNHCR-recognized Cambodian refugees in Thailand. We urge the Royal Thai Government to refrain from deporting recognized refugees and to abide by its international obligations, particularly the principle of non-refoulement.”

Another two Cambodian refugees — both tied to the outlawed Cambodian National Rescue Party (CNRP) — were forcibly returned by Thai immigration authorities to Cambodia earlier this month, prompting an outcry from human rights groups.

Veourn Veasna and Voeung Samnang were also under UNHCR protection and are among hundreds of CNRP officials and other dissidents who have been rounded up and detained on charges ranging from incitement and treason to insulting Cambodia and the monarch.

In 2017, the CNRP was dissolved by the courts. The long-ruling Cambodian People’s Party then won every seat contested at elections in 2018 and arrests have persisted, gaining momentum after opposition leader-in-exile Sam Rainsy declared he would return to Cambodia and stage a popular uprising.

Prime Minister Hun Sen has also warned his government “will do what it takes to crack down” on dissidents planning protests against his authoritarian rule when Cambodia takes its turn chairing the Association of South East Nations in 2022.

Triggs said the UNHCR is seeking urgent clarification from Thai authorities regarding the circumstances leading to this most recent deportation and the fate of those returned in Cambodia.

“UNHCR exhorts Cambodian authorities to uphold international human rights standards and to allow human rights organizations access to the deportees,” she said. “UNHCR continues to offer its full support to the government in ensuring the protection of those in need in Thailand.”