Church and political leaders in India have slammed the federal government for ending funding of a crucial scholarship scheme for more than 6 million students from socially disadvantaged backgrounds.

Students of scheduled castes and scheduled tribes (SC/ST) will be affected after the federal government run by the Bharatiya Janata Party (BJP) failed to release the funds.

“Scheduled caste and scheduled tribe students were getting the benefit of a scholarship scheme for several years and stopping the funds meant for them will have a huge impact. There is a fear that many students will drop their studies due to the financial condition of their families,” Father Nicholas Barla, secretary of the Indian Catholic bishops' Commission for Tribal Affairs, told UCA News.

Father Barla said government benefits are important to economically deprived communities so that they may come up in society.

"It is necessary to provide them as they fully depend on scholarships for their studies and barring them from this will mean lost opportunities for them,” he said.

“When you speak about sabka sath sabka vikas, meaning 'together for everyone's growth,' the government can’t ignore the weaker sections of this country. It is the responsibility of the federal government to help these communities to grow along with other communities.”

The priest said the Indian constitution stipulates equal opportunities for all and SC/ST students are entitled to financial support.

With the objective of making education accessible for all, the federal and state governments run scholarship schemes for students  at different levels.

Rahul Gandhi, leader of the opposition Congress party, has slammed the BJP, saying the federal government has made sure that marginalized students don’t have access to education.

“In the BJP/RSS (Rashtriya Swayamsevak Sangh) vision of India, Adivasis and Dalits should not have access to education. Stopping scholarships for SC/ST students is their way of ends justifying their means,” Gandhi tweeted. 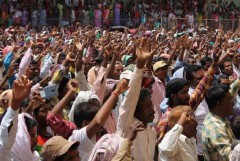