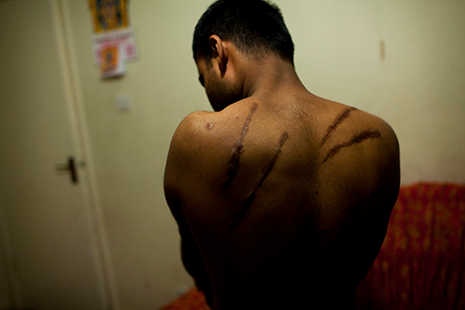 An ethnic Tamil man who was tortured by security forces while detained in Sri Lanka shows the scars on his back. (Picture: Will Baxter)

By ucanews.com reporters, Bangkok and Colombo

A statement released by HRW warned that the men could face torture and ill treatment at the hands of Sri Lankan authorities, and urged Sri Lanka’s government to ensure their safety.

Sri Lanka has faced harsh criticism in recent years for its use of torture against individuals the state accuses of links to the now-defunct Liberation Tigers of Tamil Eelam (LTTE). Last year, HRW released a report detailing 75 cases of alleged rape and sexual abuse from 2006 to 2012 in both official and secret detention centers throughout Sri Lanka. Both male and female detainees reported being raped on multiple occasions by members of the army, police and pro-government paramilitary groups.

All three of the men sent back to Sri Lanka this week had been under the protection of the United Nations refugee agency, UNHCR. Two were recognized as refugees by UNHCR while the third man’s asylum claim was awaiting a ruling.

“Many Tamils leave the country due to fear of the environment for Tamils,” he pointed out.

Malaysian authorities initially arrested the three men, all ethnic Tamils, on May 15, 2014, and detained them for 14 days for offenses under the country’s immigration act. Then, in a press release issued on May 25, Inspector General of Police Khalid Abu Bakar announced that the three were in fact “terrorists”. They were flown to Sri Lanka that night with no evidence presented to substantiate the terrorism allegations, according to HRW.

The official website of Sri Lanka’s Defence Ministry has since posted an article denouncing the three men as supporters of the LTTE, heightening concerns for their safety.

For decades the Sri Lankan government was embroiled in a brutal civil war against the LTTE, an insurgent group that fought to carve out a separate Tamil homeland in the country’s north and east until it was defeated militarily by government forces in May 2009.

Since then, the government has maintained a significant military presence in traditionally Tamil-dominated areas, and draconian wartime legislation remains in place, giving security forces far reaching powers to deal with those suspected of links to the LTTE.

In the wake of a US-backed resolution passed in March at the UN Human Rights Council calling for an international investigation into alleged war crimes committed by both the Sri Lankan government and LTTE, the government has been cracking down on activists and alleged LTTE elements.

On March 13, the country’s Terrorist Investigation Division (TID) arrested outspoken activist Balendran Jeyakumari and her 13-year-old daughter Balendran Vibooshika in Kilinochchi. The pair had been campaigning for information about Tamils who disappeared during the country’s civil war. Jeyakumari was detained under the controversial Prevention of Terrorism Act.

Three days later, rights activists Ruki Fernando of the Inform Human Rights Documentation Center and Oblate Father Praveen Mahesan, director of the Center for Peace and Reconciliation, were also arrested in Kilinochchi, when they visited to look into Jeyakumari’s case. After a wave of condemnation from foreign governments and rights groups, the latter pair were released.

Then on April 11, Sri Lankan soldiers killed three men in a jungle area of northern Mullaittivu district. The Defence Ministry justified the killings by claiming that the men were involved in a movement attempting to revive the LTTE.

“To my knowledge there is no revival of the LTTE in the north and east,” said Premachandran, who is also a former militant.

"The mention of an LTTE resurgence has the political effect of reminding the [Sri Lankan] people of the Rajapaksha victory against the LTTE, and as a consequence, their continuing relevance at the helm of the security apparatus," said Paikiasothy Saravanamuttu, executive director of the Center for Policy Alternatives in Colombo. "It also has the effect of delegitimizing the UN resolution on the grounds that the LTTE is still alive and needs to be combatted."

“Sri Lanka is increasingly paranoid of the links between the Tamils in Sri Lanka and those in the diaspora,” said Jan Jananayagam, director of the diaspora group Tamils Against Genocide. “It is also keen to build a narrative of LTTE revival in order to justify its military occupation of Tamil areas.”

“Even if the men had past LTTE links there is no evidence of present activity, since the LTTE no longer exists as an armed force,” she added.

Jananayagam said that talk of an LTTE revival was “very much linked to the UN investigation” and was part of a government campaign to “suppress evidence” reaching investigators and to “discredit the many international Tamil advocacy groups that lobbied UN member states for the resolution”.

“The Sri Lankan government's recent success in securing fast-track deportations of Sri Lankan Tamils from various countries appears part of its larger campaign against Tamil activists inside and outside of Sri Lanka,” said Alan Keenan, Sri Lanka Project Director and Senior Analyst at the International Crisis Group. “Among other things this campaign seems designed to obstruct the networks through which evidence of war crimes can be shared with UN investigators.”

The Sri Lankan government has maintained that torture is never permitted as a punishment or used in interrogations.

However, as of the end of last year, the UK-based rights group Freedom from Torture (FFT) had forensically documented 120 cases of torture in Sri Lanka since the end of the war.

The hallmarks of torture in Sri Lanka “include branding with hot metal rods across the back and legs, asphyxiation by petrol-infused plastic bag or burning chilies and sexual torture including rape”, said Best.

The accounts are “so similar and consistent across the group that they are hard to dismiss as isolated cases,” he added.

“Given the growing body of evidence that Tamils suspected of involvement with the LTTE are regularly tortured and sexually abused by Sri Lankan police, no governments should return Tamil refugees or asylum seekers accused of such links until conditions in Sri Lanka have changed and firm guarantees of safety have been arranged,” said Keenan.