Rev. Angela Berners-Wilson: "The way in which Jesus treated women, engaged and spoke with them, was radical for his time and that is important. He treated women with great respect." 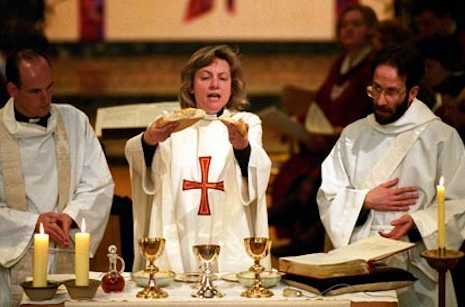 Christianity was always a part of my life growing up; my father was a priest. My vocation evolved when I was studying theology at university, but in the 70s all that a woman could be in the church was a lay worker in a parish or a deaconness. I took a gap year and went to Australia for six months before I went to theological college, and there I met someone who wasn't churchgoing who said, "Well, why don't you want to be a priest?" Even though the idea of a woman becoming a priest seemed so far away, I knew that was what I wanted to do. A lot of women felt the same, and in 1978 the Movement for the Ordination of Women was founded and I became a member. At the time, there were women priests in America, Canada, New Zealand and some African countries. If women felt their vocation was to be a priest, then they deserved the chance to explore that calling. We have a lot of women clergy now, and equal numbers of men and women are entering theological college, although there's still a long way to go. There are still pockets of resistance. In my day, only three theological colleges accepted women. A lot of the men at my college didn't believe that women should be priests - but, ironically, our principal was a woman. Biblical fundamentalists say, "Jesus was a man, all his disciples were men, and so only a man can represent Jesus at the altar." But the way in which Jesus treated women, engaged and spoke with them, was radical for his time and that is important. He treated women with great respect. The General Synod finally approved the way for women to be priests in 1992, and it took until 1994 for the legislation to be passed. There were 32 of us being ordained at the same time. It was just amazing - very exciting and nerve-racking, although there was great sadness, too, as my mother had Alzheimer's and my father was with her, so they were unable to be there. But I shall never forget that service. It just so happened that no one had a surname beginning with 'A', so I was first in line. But the way I see it, no one is ordained until the final amen is said, so all 32 of us became the first female priests together. Eighteen months after I was ordained, I was offered a job in a very rural, traditional area in Wiltshire. I think it was unusual for some of the parishioners to have a woman priest - some members of the British Legion were slightly reactionary to it. Those of us in the first group of female priests had to prove ourselves. You do the very best you can, because if something goes wrong, then they might say, "What do you expect? She's a woman." I had to guard against that and was on my best behaviour for years, which was quite exhausting. But everyone should always do the very best they can. Full Story: Angela Berners-Wilson: I was the first female priest in EnglandSource:The Guardian