An interfaith prayer for Myanmar in Italy Nuns pray for Myanmar at Milan Cathedral on May 29. (Photo supplied)

While the violence and massacres in Myanmar continue as the political initiatives have failed, the faithful around the world continue to pray for the country.

After Mass in Rome celebrated by Pope Francis, Archbishop Mario Delpini presided over a moving moment of prayer held in Milan Cathedral in Italy on May 29.

Buddhists monks and believers and Catholics nuns and faithful came together, offering their respective prayers. It was a genuine gesture of reciprocal recognition and respect.

I was asked to briefly update the situation in Myanmar, which I did it with the following words:

One hundred and eighteen days ago, the peoples of Myanmar returned to the nightmare of repression and violence. On Feb. 1, the criminal military junta disavowed the results of the November 2020 democratic elections, dissolved the civilian government and arrested leader Aung San Suu Kyi. People took to the streets, peacefully opposing the coup.

At least 833 unarmed people, mostly very young and even about 50 children, have been killed, among them many Christians. The situations of the Kachin people in the north of the country and of the Kayan in the central state of Kayah are particularly tragic. In Kayah are the dioceses of Loikaw and Pekhon, founded by PIME missionaries and important centers for Catholic life and evangelization throughout Myanmar.

Common criminals have been released to cause violence. They set fire to and destroy the homes of those who resist

The new Pekhon Cathedral was attacked. In the nearby Diocese of Loikaw, Alfred Ludu and Patrick Boe Reh, two 18-year-old Catholics, were killed on May 27 while taking aid to the displaced in the city of Demoso. In the village of Kayan Tharyar, the Sacred Heart Church was attacked and four faithful, women and men, were killed, and many more were wounded. Tens of thousands of people have fled their homes for their safety. Convents protect many of them. Here, while I am speaking, there are people in this cathedral, including religious sisters, who told me of their anguish over the fate of their families.

Some 5,500 people have been arrested, while almost 2,000 are in hiding as they are wanted by the police. The armed forces take opponents from their homes day and night. Common criminals have been released to cause violence. They set fire to and destroy the homes of those who resist. They wound and kill in the crowd with long sharp knives. Terrible photos and videos testify to these and other crimes.

Myanmar, which was recovering, suddenly plummeted again to 1962, when the military took power, and since then they never really relinquished it. Young people are willing to die defending freedom and make a will before taking to the streets. They know it may be their last day, like Kyaw Zin Hein, the 19-year-old known as the Angel of Mandalay, one of the heroines of this horrible tragedy.

Myanmar is a land of the Buddhist faith. Buddhist brothers and sisters, including some monks, are here with us. We are experiencing an important moment of mutual recognition and respect. In 2007, many monks were at the forefront of freedom during the Saffron Revolution — a term for the golden color of the Buddhist habit. 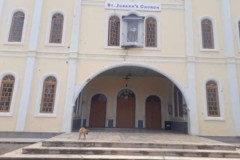 Today Catholics are at their side, peacefully committed to freedom, whose author is Jesus. We have seen images of Catholic faithful joining popular movements similar to those seen in the Philippines in 1986, in South Korea in 1987 and in Hong Kong in the past two years.

Christians and Buddhists are on the streets not with weapons but with the rosary, the Buddhist pa-deé and placards calling for peace. Sister Ann Rose's photo, taken in front of the police platoon, has become the symbol of the popular movement of Myanmar. She said: "Kill me and not the people." Like Jesus. Like one who gives his life.