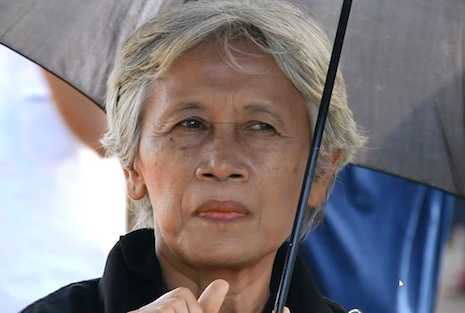 Maria Catarina Sumarsih has protested outsidse the Presidential Palace in Jakarta on every Thursday since January 18, 2007

For 15 years, Maria Catarina Sumarsih has waited for justice for her slain son. And for more than six years, she has protested every Thursday outside the presidential palace in Jakarta, but to no avail.

In November, 1998, six months after four student protesters were shot and killed by the military in the Indonesian capital, soldiers killed another 18 students at universities across the country including those from the Catholic-run University of Atma Jaya in Jakarta in a bloody week of crackdowns by the state.

Bernardus Realino Norma Irawan was one of the students at Atma Jaya protesting a special session of the People’s Consultative Assembly many deemed unconstitutional with demonstrations also calling on the government to address a deepening financial crisis.

“Using a microphone, he asked a military officer for permission to carry his friend’s body. After receiving permission, he raised a white flag to show the military that he wanted to offer help,” said Sumarsih. “But suddenly he was shot.”

The autopsy showed her son died after being hit by a military standard bullet.

“I often cried. I just sat in silence and didn’t eat much for the first three months,” said Sumarsih.

Dozens of military personnel were found guilty but they were all low-ranking. What Sumarsih and other victims’ families wanted was prosecutions against the decision-makers at the top of the military.

In 2000, the House of Representatives created a special team to monitor investigations. But a year later, its report found no gross violations of human rights associated with the killings.

Continuing to struggle for justice, Sumarsih and other victims’ families urged the National Commission on Human Rights (Komnas HAM) to conduct an investigation. Its subsequent report came to the opposite conclusion to the House of Representatives’ special team: gross rights violations had taken place, said Komnas HAM.

But when it submitted its findings to the Supreme Court the court refused to follow up.

That’s when Sumarsih decided to begin her silent protests. On Thursday, January 18, 2007, she and other victims’ family members dressed in black and held black umbrellas with different slogans and stood outside the presidential palace.

The protests have continued ever since and have occasionally produced results.

In 2008, President Susilo Bambang Yudhoyono invited Sumarsih and other victims’ family members to a meeting in which he promised to establish an ad hoc human rights court to try the perpetrators.

Then in 2011, they met the coordinating minister for Political, Legal and Security Affairs Djoko Suyanto.

“He made the same promises as the president,” says Sumarsih.

But the court has never been established. Last year, Albert Hasibuan, a presidential advisor, held another meeting with the group in which he downgraded the government’s commitment to seeking justice. Hasibuan suggested an apology by the president would be a good solution.

“I refused,” said Sumarsih. “Those violating human rights must be punished. An apology isn’t enough.”

But no further action has been taken by the government, and Eva Kusuma Sundari, an opposition lawmaker, says she doubts there ever will be a proper response.

Haris Azhar from the Commission for the Disappeared and Victims of Violence said that Yudyohono’s record on seriously addressing Indonesia’s legacy of rights abuses by the military remains poor.

“The House of Representatives weak control also contributes to such stagnancy,” he said.

Meanwhile, Sumarsih and fellow protesters continue to protest. Their action has become known as Kamisan, the Bahasa word for ‘Thursday’. By May this year, there were more than 300 members of what has turned into a general human rights movement in Indonesia.

In 2004, she received Indonesia’s Yap Thiam Hien Award for her fight for justice.

“Honestly, I feel tired,” she said. “[But] I will always stand here until the trials of the killers of my son and other victims of past human rights violations are properly processed. We cannot let the killers walk free.”