Filipino women demonstrate in Manila to assert their rights on the occasion of the observance of International Women's Day. (Photo by Rico Ibarra)

A case of a gang rape of a 19-year old British woman in Ayia Napa in southeastern Cyprus by 12 Israeli youths aged 15 to 18 years old in July 2019 has received international attention.

Ayia Napa is a town described as the Sodom and Gomorrah of the Mediterranean and the sex, alcohol, and drug abuse capital of Cyprus. Stay away, bad things happen to good people there.

The policing and justice system in Cyprus is far from just in this case, it seems. Somewhat corrupt, one can say. The young woman, after she reported the alleged rape to the police expecting help and protection instead was accused of lying. Medical examination showed evidence consistent with multiple rape.The place reeks of male domination and a near-total absence of respect for the dignity and rights of women. It seems to be a cesspool of depravity and immorality where 15-year old teenagers allegedly rape women.The Cypriot police immediately took the side of the 12 well-off Israeli youths and blamed the victim. The woman, they decided, was the criminal. The police pressured her during interrogation and finally forced her, without a lawyer being present, to sign a statement retracting the rape allegation. She thought they would let her go home. Instead, they charged her with a crime -- public mischief -- and released the 12 suspected rapists. She was convicted in a Cyprus court recently and received a four-month suspended jail sentence.

Hundreds demonstrated in support of her outside the courtroom. Her lawyers will appeal to clear her name. One lawyer said that the woman had been stripped of her dignity and human rights. They would take the case to the European Court of Human rights if necessary, he said.This is a classic example of "blame the victim," a practice that points to the woman as the culprit and a liar.

It is this practice designed to inflict pain and suffering on the victim and exonerate the accused that is so unjust. It instills fear in women and children and prevents them from coming forward to report sexual abuse. It gives encouragement to child abusers and rapists to scare victims into silence and repeat their heinous crimes. Other sex abusers deny everything; some offer money to buy the silence of the victim.

Abusive men demand and expect women and even children to satisfy their lust and sexual fantasies as if it is their right. They have ascendency over children and intimidate them to be submissive and docile. That’s another reason why sexual abuse of children is so widespread.  In many cultures, children are taught to always respect and obey adults and never go against the older person. When the child fights back, threats are used to scare the child into silence. "I will burn your house down if you tell anyone our secret," the abuser warns the child, or "I will kill you and your mother if you tell."
Related News 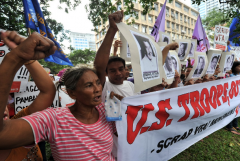 Hundreds of thousands of children and women are subjected to this brutal treatment to silence them.

When children are abused by their biological father, stepfather, live-in partner of the mother, grandfather or brother or cousin, the child is silenced. They are the most common abusers of children. Incest is widespread but is kept a family secret. The child is warned not to tell. "Do you want to destroy our family’s honor and name?" the child is told. "Where will you live if you do that, who will believe you? No one, you are a liar, don’t speak of it."

The intimidation is complete. The child victims of sexual abuse face retaliation, punishment, rejection, degradation and exclusion. Some are sent far off to a remote province to suffer alone unaided. Women are sexually exploited and abused daily. A report by the Center for Women’s Resources says a woman is raped every hour in the Philippines.Is it not extraordinary that after thousands of years of subjugation, women were only able to organize themselves to stand for their rights after 1848 in the USA and got the right to vote only in 1920? In Europe, women began to organize themselves in 1860. Such was the power of male domination of all aspects of human society they controlled women and considered them inferior to men.Their rights movements continue to challenge that domination and have expanded around the world so that women’s rights are enshrined in the laws of many countries but are not always implemented. They still struggle and fight for their rights to political and economic equality, for pay and civil rights. The #MeToo Movement is another movement for the struggle for dignity, recognition and justice and freedom from sexual exploitation by abusive men.Millions of women and children are victims of human trading and trafficking. They are still treated as property to be sold and exploited in forms of modern slavery. Amazingly, society, in general, doesn’t seem to care or to be outraged very much by this grave worldwide injustice and human slavery and brutal treatment. The victims are transported to other provinces or countries and are forced to remain silent and suffer and endure as if slavery is their designated role in life. Thousands of refugees and migrants are exploited in the evil trade of poor vulnerable people.The challenge for us is to uphold and fight for the dignity of women and children and men. We need to have a dedicated intolerance, a sense of anger and be ready to protest when there are violations of the dignity and rights of anyone. Men too must be part of this protest and action for justice and human rights. Together, we must speak out and act until one day true equality and respect is experienced by all.Irish Father Shay Cullen, SSC, established the Preda Foundation in Olongapo City in 1974 to promote human rights and the rights of children, especially victims of sex abuse. The views expressed in this article are those of the author and do not necessarily reflect the official editorial position of ucanews.
Support our Catholic journalism with a contribution of any size
Your contribution will help the Catholic journalists and editors in UCA News to report news, features, commentaries, video stories and podcasts on issues affecting the lives of millions of Catholics around the world.
Here is a gift of two valuable books as a token of appreciation to you.
Check your mailbox for links to these PDF/e-Books.