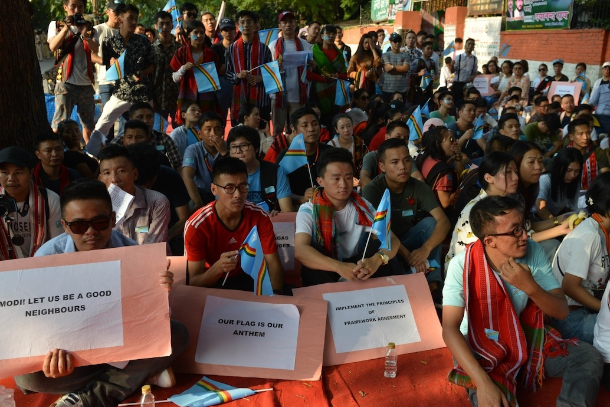 Students from Nagaland under the banner of the Naga Students' Federation participate in a protest rally in New Delhi on Sept. 25 seeking a faster solution to the protracted Naga homeland talks.

Amid fears of the collapse of 22-year-long peace talks between Naga tribal insurgent groups and the Indian government, hundreds are praying for peace in Christian-majority Nagaland state.

Several Naga militant groups fighting for a separate tribal homeland joined the Oct. 23 fast to pray for the success of the ongoing peace talks.The Council of Nagalim Churches (CNC) called for the fast during crucial rounds of talks between the federal government and the National Socialist Council of Nagaland-Isak Muivah (NSCN-IM).Nagaland state governor R.N. Ravi, the chief negotiator for Prime Minister Narendra Modi in peace talks that began in 1997, has been given a deadline of Oct. 31 to wrap up the talks, local reports said. In a statement on Oct. 18, Ravi said a draft plan for a comprehensive settlement had been prepared after meeting various stakeholders including church leaders, Naga tribal groups and non-tribal groups.
Related News "Unfortunately, at this auspicious juncture, the NSCN-IM has adopted a procrastinating attitude to delay the settlement by raising contentious symbolic issues," the statement said.

It referred to NSCN-IM leader Thuingelang Muivah's demand for a separate constitution and national flag for Nagaland.

Ravi's statement said that "endless negotiation under the shadow of guns is not acceptable." With both sides taking firm stands, the prospect of collapse looms large, threatening to return the region to violence again.

Since Indian independence in 1947, Naga tribal leaders have been demanding to form a nation independent of India.

The formation of separate Nagaland state in 1963 did not end the demands, forcing India to deploy the army to suppress an insurgency.

Violent secessionist moves and tribal infighting for dominance and counter-insurgency action in the next three decades turned Nagaland into a volatile region.

As part of the peace talks, NSCN-IM and the Modi government signed a Framework of Agreement in 2015, but the content of it was not made public.Militant groups continue to demand Nagalim or Greater Nagaland to create a homeland that will include all Naga inhabited areas. It covers areas in the neighboring states of Arunachal Pradesh, Assam and Manipur.Meanwhile, the influential Naga Students' Federation (NSF) has asked the Modi government to stay away from "imposing" a solution on Naga people.

"The solution to the protracted Indo-Naga political issue should be inclusive, honorable and acceptable based on the uniqueness of Naga history," an NSF memorandum said.

It also said the federal government should "desist from provoking" Naga people by sending armed forces to their homeland and issuing any statements of threat.

The Naga Mothers' Association, the top body of tribal women, said women and children had been the worst victims of the conflict and appealed "to our leaders and brothers from different Naga political groups to come together in peace."It also asked for them to "speak for a solution that brings sustainable peace to the Naga people and our children."At present, at least six Naga groups are talking to the Indian government.

Modi's pro-Hindu Bharatiya Janata Party is part of the coalition that runs the state government in the Christian-majority state. Some 90 percent of Nagaland's 1.7 million people are Christians, mostly Baptists.