Determined to go back home with good memories from a historic India visit and not to ruffle his host, US President Donald Trump said Indian Prime Minister Narendra Modi stands for "religious freedom."

The US president's endorsement of Modi's policy came after the Indian capital witnessed deadly clashes over a newly enacted citizenship law that has been described as discriminatory against Muslims.

"I will say the prime minister was incredible on what he said ... He wants people to have religious freedom very strongly. And he said in India they have worked very hard, they have great and open religious freedom," Trump told a media conference in New Delhi on Feb. 25 after he and Modi had held talks on a wide range of issues.

At least 20 people were killed including a police constable over two days as violence erupted between those supporting the citizenship law — generally seen as supporters of Modi's pro-Hindu politics — confronted opponents of the law in a Muslim area of New Delhi.

The Citizenship Amendment Act (CAA) provides for fast-tracking citizenship rights to religious minorities from Pakistan, Bangladesh and Afghanistan, but not Muslims.

Opposition parties including socialists, communists and the Congress party have described the law as "unconstitutional" and accused the government of using its big majority in parliament to ensure its passage in December.

"If you look back and compare with other places, India has always worked hard for religious freedom," Trump said. "We talked about it [religious freedom] for a long time. As far as individual attacks are concerned, I have heard about it but I did not discuss it. That's up to India."

Quizzed about the violence in Delhi due to the CAA and especially in the last two days, Trump said it was India's internal matter. "It is really up to India."

The US president said India has about 200 million Muslims and added that Modi told him that his government is working very closely with the community to resolve differences.

"It is for India to do, and hopefully they will do the right thing," he said in the context of the new citizenship law. 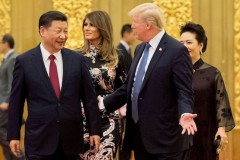 Human rights off the table as Trump visits China Trump and Modi also issued a joint press statement applauding the growing defense cooperation between the US and India and highlighting their joint role in fighting terrorism fed and supported by radical Islam.

" ... with regard to the term religious freedom … here I think there was appreciation on both sides that pluralism and diversity are the common binding factor of both countries,” Shringla said.

Christian groups have been campaigning against the citizenship law, saying the move is not only against Muslims but also violates the secular principles of India’s constitution that guarantees equality before the law for all citizens.

Christian leaders have been complaining that violence against them has increased since Modi came to power in 2014. Pro-Hindu groups that support Modi’s Bharatiya Janata Party (BJP) have stepped up their action against Muslims and Christians after using the election victory as a mandate to push for making India a Hindu-only nation.

After their biennial conference, Indian bishops categorically spoke against the CAA on Feb. 19.

“Religion shall not be a criterion for determining Indian citizenship. The authorities should come forward with sincere and effective means to erase the sense of fear, anxiety and uncertainty spreading in the nation, especially among the religious minorities,” their statement said.

Trump concluded his 36-hour-long maiden India visit on Feb. 25 evening. On his arrival, he addressed a massive rally with Modi in Ahmedabad, seen as a way to win favor with an estimated four million Indian Americans who could influence his prospects in the presidential election in November.