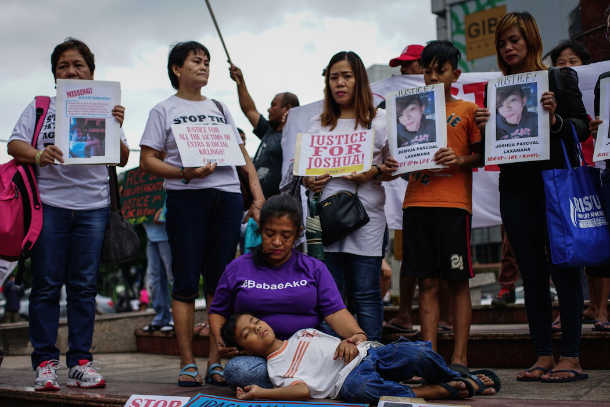 Family members of victims of drug-related killings dramatize their call for justice in a demonstration in Manila. (Photo by Jire Carreon)

Hope isn’t a word normally associated with Payatas, a sprawling slum 21 kilometers northeast of the seat of power in Manila and just three kilometers away from Congress.

There, 5,000 of the Philippine capital's poorest families crowd around mountains of trash, also the source of their livelihood.

About 19 years ago, at least 200 people died when a dump collapsed on their homes. At least 300 remain missing to this day from that disaster.

Many voters in Payatas, bristling on the margins of Filipino society, were among the 16 million who swept President Rodrigo Duterte to power in 2016.

The former mayor from the southern city of Davao billed himself as a brawler for the masses. He promised to save Filipinos from poverty and from the terror brought about by drugs.

Duterte hasn’t made much of a dent on poverty and his pogrom against drug users has killed more than 5,000 in police operations alone.

Motorcycle-riding gunmen, who human rights groups have linked to the country’s corrupt police, have killed at least twice that number.

At least 300 of the victims came from Payatas, said Father Daniel Pilario of the Congregation of Mission, popularly known as the Vincentians. Most of those killed were the breadwinners of families long in desperate straits.

Father Pilario, a trained sociologist and dean of the St. Vincent School of Theology, is guest minister in the parish named "Mother of the Promised Land."

He said only a fraction of the many affected families under his care want to pursue justice for their slain kin.

The urgent need to fill the economic vacuum, the terror of state reprisals, and Duterte’s promise to pardon police hauled to court for following his orders, prod many to settle for "symbolic justice."

The yellow chicks pecking at rice grains on top of coffins represent hope for the awakening of conscience, said Father Pilario.

The sound — tok, tok, tok — is the sound of knocking, eerily close to "tokhang," the slang portmanteau of a mad war where everybody is fair game except for Duterte’s aides, advisers and family friends.

Father Pilario’s vulnerable flock sees wisdom in caution, in waiting out the bloodlust. That shouldn’t be mistaken for surrender.

Nurturing the living, especially more than 50 orphans, is in itself a victory for unschooled women who have had to learn new livelihood skills.

Dignity is their byword. Very few ask for rice or money, said the priest. What they seek a safe space for bi-monthly "agape" where convulsions of grief are soon replaced by survival tips. (Agape is a Greco-Christian term referring to love, "the highest form of love, charity" and "the love of God for man and of man for God.")

Neighbors often spurn the families of the fallen, either due to fear or the misplaced notion that their kin had it coming.

Widows, siblings, older orphans have stepped in to fill the breach in compassion, offering time and labor, food or baby-sitting services, or just a handclasp to ground one lost in the mists of pain.

They shun the formal structures of justice but offer their services as witnesses, not just to the horrors of Duterte’s war but to the dream of a gentler world they refuse to give up.

They shy away from cameras but they hop around churches and villages, any group willing to listen and understand.

Father Pilario, speaking at a small forum of theology students of evangelical Christian churches, smiled when someone remarked that it is hard to plan aid when so few venture to seek help.

"Do not wait for them to come to you," said the priest. "Go where they are."

Seeing lives up close and personal could help marshal scant resources. Even more important, people could learn first-hand a new context of forgiveness — as care and responsibility.

It is not about who deserves it, but who needs it.

Many of the women Father Pilario ministers to were battered and terrorized by kin and neighbors. That is the reality in their neighborhoods.

But Irene went out to claim an estranged partner’s body and took the responsibility for burying him, struggling to raise money as he slowly took on a green tinge inside a coffin of soft board.

A young mother of three embraced a slain partner’s four children by another woman. An 86-year-old grandmother, crippled by arthritic pain, shepherds her son’s seven orphans — their mother is in jail — and insists on a contract for the little sum Father Pilario offers for a home-based business.

Too many Filipinos are gripped by fear and despair, falling back on asking God to brush out Duterte from the world.

But Duterte did not arise in a vacuum. The persevering women of Payatas are testimonies that moral choices can be made amid fear and pain.

They, too, are the voices of resistance, their truth — that faith in God must start with faith in each other — grounded in blood and tears.

Their humble, daily "agape" sends a strong message: "They want us to die. We will live. And we will show them how to live."