People hold up placards in support of the Black Lives Matter movement as they take part in the inaugural Million People March march from Notting Hill to Hyde Park in London on August 30, 2020, to put pressure on the UK Government into changing the "UK's institutional and systemic racism". (Photo: Justin Tallis / AFP)

The Catholic Church in America must do more to enhance interactions between Catholics of different races, says Archbishop Wilton Gregory of Washington.

The Washington archbishop urged the bishops to uphold the legacy set by religious leaders during the civil rights movement, Cruxnow.com reported.He was addressing a group of students, staff, and alumni from the University of Notre Dame on Aug. 21 as part of "Building an Anti-Racist Vocabulary," a weekly lecture series.
Donate to UCA News with a small contribution of your choice
At the webinar, he said interracial dialogue should be organized in such a way that the participants should not feel that they are being "lectured at" or "put down.""We have to set up those kinds of conversations that speak the truth in love," he added. Archbishop Gregory said that individual responsibility is also important to combat racism."We know that there is systemic racism woven into almost every dimension of the American institution," the archbishop added.The prelate applauded the youth in confronting racism after the killing of George Floyd this spring. The youth came out to the street in large numbers mainly "because of their concern about racial injustice and racism," he said.The archbishop said that the struggle initiated by the youth should be taken to the next level.
Related News 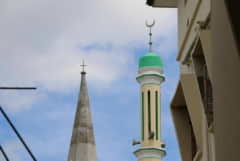 Thank you. You are now signed up to Daily newsletter
"I think we've got to continue the struggle."Highlighting race relations within the US Church, Archbishop Gregory recalled his own experiences when he was an auxiliary bishop in the Archdiocese of Chicago. At the time, certain people told the prelate to lead the confirmation rite for Black Catholics, suggesting it would be pleasing for Black Catholics to see a bishop who looked like them. However, he had a different idea.