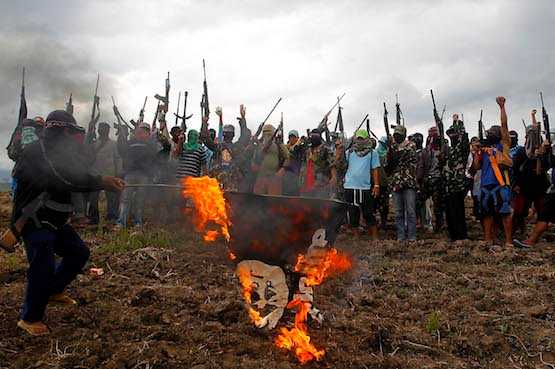 Members of an armed Christian vigilante group burn a flag of the so-called Islamic State in Mindanao in January to show readiness to defend their communities in Mindanao. (Photo by Mark Navales)

The shooting of Saudi scholar Ayed Al-Qarni in the southern Philippines on March 1 has fueled fears of a competition among Philippine supporters of the so-called Islamic State (IS) to gain formal entry into its network.

But the country's murky political waters could also be hiding forces out to influence results of the coming national and local elections in May, or further derail the peace process with Muslim rebels in Mindanao, or both.

The attack on Al-Qarni happened as government troops mopped up after days of fighting in Lanao del Sur province that killed 60 people and displaced 20,000 others.

Hours before the attack, retired police intelligence director Rodolfo Mendoza warned that small groups are plotting "bigger, bolder attacks" to woo the IS, which has been aiming to establish a global caliphate.

Talks of a caliphate are not new to Mendoza.

A decade ago, he helped dismantle the Rajah Sulayman Movement (RSM), which backed the Jema'ah Islamiya terror group's goal of establishing an Asian caliphate.

Composed mainly of converts, the RSM believed Islam was the country's dominant religion before Spain brought in Catholicism four centuries ago.

Western intelligence analysts like to harp on about IS's caliphate ambition, but most of Southeast Asia's rebel groups are focused on establishing their ethnic identity.

Movements across ideological lines are prompted by shelter and training needs, and sometimes a cynical belief that whoever hurts the enemy is a friend.

The country's foreign allies called it a giant step in the peace process, but political opposition and a Supreme Court decision killed the deal.

Intense fighting followed, displacing half a million people over the next two years.

Most leaders of the RSM and the Abu Sayyaf are in jail or dead. But these groups hogged the headlines recently by posting videos of their pledge of allegiance to the IS.

The RSM video was taken in a high-security portion of a jail with many political prisoners. The Abu Sayyaf video showed it had linked up with three other smaller groups, including the Maute Group in the province of Lanao del Sur.

An outbreak of violence often raises conspiracy theories in the Philippines.

The incident cemented opposition in Congress to a law on expanded autonomy, a requisite for a final peace agreement in Mindanao. Critics of the peace process used the incident to paint the draft law as an open gate for terrorist groups.

The recent fighting in Lanao del Sur province heightened concern that radicals could be forcing the government's hands as aging rebel leaders struggle for control of an existing cease-fire agreement.

Americans have long been suspected of dirty tricks in Mindanao. Their operative, Michael Meiring, blew off his legs while tinkering with explosives in a Davao City hotel room. The U.S. government whisked him off on an unlisted aircraft. Meiring never faced questioning for the Davao bombings that happened shortly before his accident.

Saudi and Libyan dignitaries have also been linked to rebel activities and both countries have donated big sums to guerrilla groups.

Police officials in charge of the Mamasapano operation last year told investigators they kept military colleagues blind on the urging of American trainers and advisers.

In the Philippines, both politics and terrorism dangle the lure of money for recruits. It would be too easy for politicians and their patrons to swirl more turmoil in Mindanao. Then and now, civilians will pay the price for the games the powerful play.