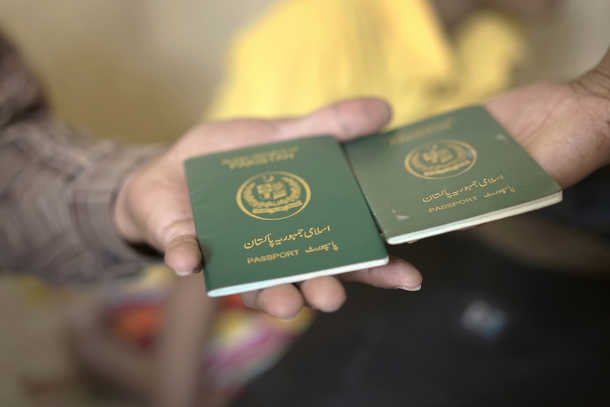 Pakistani Christian refugees show their passports in a small apartment in a Bangkok suburb on Nov. 3 after fleeing persecution in Pakistan in 2013. Christians in Pakistan are the sporadic targets of Islamists, while pernicious charges of blasphemy are easily pinned on the group, often to settle personal scores in the Muslim-majority country. (Photo by Adam Jones/AFP)

Christians continue to be the most persecuted religious group, according to a report by Aid to the Church in Need (ACN).

Almost 300 million Christians, or one out of seven Christians in the world, live in a country where they face violence, arrest and human rights violations.

Some 61 percent of the world's population live in countries where religious freedom is not respected, meaning that six out of every 10 people around the world cannot express their faith with total freedom, Vatican News reported.

These were some of the figures unveiled in the Religious Freedom Report 2018 by ACN, the international pontifical Catholic charity and foundation that helps persecuted Christians worldwide.

The report looks at 196 countries, examining the degree to which the basic right to religious freedom, as defined in the United Nations Universal Declaration of Human Rights, is respected with regard to all the major religious faiths.

The report, which contains data from June 2016 to June 2018, shows grave violations of religious freedom in 38 countries. In 17 of them there is serious discrimination on grounds of religious faith, while in 21 there is outright persecution of religious minorities, in some cases to the point of death.

The ACN study shows that in 22 countries the reasons for attacks on religious freedom are rooted in radical Islamism, while in other countries the dominant causes are the authoritarianism of states or governments which pursue policies of "aggressive nationalism." Among these countries are China, India, North Korea, Myanmar, Vietnam and Kyrgyzstan.

On a more positive note, the report pointed to an improved level of religious freedom for minorities in Syria and Iraq following the military defeat of terrorist group Islamic State.