UN says there have been allegations of summary executions of civilians, including children

"In the aftermath of the attacks, State Counselor Aung San Suu Kyi has rightly called for proper investigations to be conducted and for no one to be accused until solid evidence is obtained," said Yanghee Lee, the U.N. Special Rapporteur on the human rights situation in Myanmar in a statement.

"Instead, we receive repeated allegations of arbitrary arrests as well as extrajudicial killings occurring within the context of the security operations conducted by the authorities in search of the alleged attackers," said the South Korean.

"What troubles me most is the lack of access for a proper assessment of the true picture of the situation there at the present moment," she said.

There have been allegations of summary executions of civilians, including of children, during the security forces searches and raids, said the statement.

Aid agencies have reported that up to 15,000 people, are thought to be mostly Rohingya Muslims, have been displaced since Oct. 9, reported Reuters.

Myanmar officials have said that their security forces have killed 30 "attackers" and detained over 50 suspected militants.

Rights group and Rohingya sources told Reuters that the death toll from the violence is higher than reported that civilians are bearing the brunt of the military-led operation. 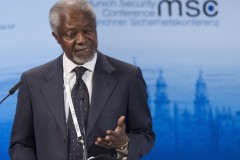