Community still doubts justice will be served after 2016 violence that forced 7,000 from their villages 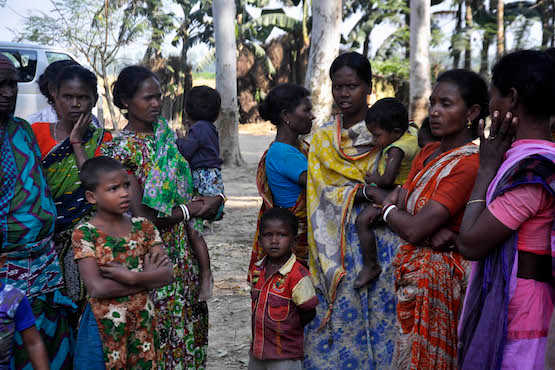 Indigenous Santals wait for aid on Nov. 17, 2016, days after they were violently evicted from disputed land in Gaibandha district of Bangladesh. (Photo by Stephan Uttom/ucanews.com)

Police in northern Bangladesh have arrested one of the alleged masterminds of arson attacks on the indigenous Santal community in 2016 that left at least three dead, dozens hurt and hundreds of houses burned down in Gaibandha district.

Ruhul Amin, 33, was arrested late on Jan. 9 in the Gobindaganj area of the district, police officials said.

Amin, a Muslim and labor leader of the state-run Mahimaganj Sugar Mill, is accused of being one of the masterminds of the violent attacks on Nov. 6-7, 2016.

Besides Santals, nine policemen and some workers were also hurt in the clashes.

“Ruhul Amin is one of 33 persons who led the eviction drive. He was involved in looting, arson and beating Santal people. He confessed to crimes in primary interrogations,” Aktar Hossain, additional police superintendent of district police, told ucanews.com.

The attacks led by mill laborers with backing from the local police and administration resulted from a longstanding land dispute between the mill authority and the Santal community.

About 7,000 Santals, mostly Catholics, lost their houses and were forced out from two villages in Gobindaganj.

Following violence, Santals filed a case with police against 500 attackers including 33 workers and local thugs.

Amid a media outcry and criticism from rights groups, the government withdrew the district police chief, deputy commissioner and chief government officer for their negligence in the case.

Philemon Baskey, a Santal Catholic, said the community was doubtful about justice being served.

“It’s been more than one year and two identified attackers have been arrested. The main culprits are still at large. We still doubt if justice will be delivered to us,” Baskey told ucanews.com.

Bishop Sebastian Tudu of Dinajpur, whose diocese covers the area, claimed the victims are not getting adequate support from the police, courts and administration.

“Santals are helpless as they don’t have the money or power to fight for justice as their attackers are very strong and influential. The situation is critical and, without support from politicians, civil society and media, these poor people are unlikely to get justice and compensation,” Bishop Tudu said.

In Bangladesh, about 90 percent of the population are Sunni Muslim, 8 percent Hindu and the rest belong to other faiths including Buddhism and Christianity.

About three million people belong to 45 ethnic minority groups, while about half of the country’s Christians hail from indigenous communities.