All work and little pay for outsourced Hong Kong workers

The government should not shirk its obligation to promote labor rights that in turn enhance social justice. An outsourced employee works under the hot sun in Hong Kong in May. Concerns are growing that many such workers are being exploited. (ucanews.com photo)

A Hong Kong cleaning company ending its contract with the Housing Department in January asked its outsourced workers to sign voluntary resignation agreements.

However, there were concerns that the Hoi Lai Estate contractor was seeking to avoid providing severance pay.

In mid-April, an outsourced cleaning service contractor for the Food and Environmental Hygiene Department was revealed not to have issued standard employment contracts or salary records to its employees. It had allegedly been underpaying them as well as not providing travel expenses.

Complaints were addressed only after the matter received media attention.

Yet again unfairness in outsourcing arrangements, which have become increasingly common during recent decades, was highlighted.

According to government statistics, the above-mentioned departments and the Leisure and Cultural Services Department entered into contracts covering a total of more than 53,000 outsourced workers.

Average expenditure savings were in the order of 29 percent, according to a 2012 survey.

As well as pay and conditions, the issue of the quality of public services looms large.

Labor-intensive cleaning industry companies seek to cut pay and welfare expenses as well as employee training and the standard of equipment provided to them.

Many local surveys show that most government-outsourced cleaning workers are on the statutory minimum wage, which is lower than average hourly wages more generally in the cleaning services industry. 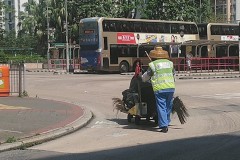 There is a lack of policy uniformity among government departments on available protections for outsourced workers.

The Hong Kong government, being the "big boss" under the outsourcing system, should set an example of being a conscientious employer and take a leading role in protecting grassroots workers' rights.

The commission has urged the government to review the outsourcing system as soon as possible, including to make sure that contractors offer a market-based wage as well as ensuring occupational health and safety.

Regarding workers only as tools for making profits is shameful and sinful.

The government should not shirk its obligation to promote labor rights that in turn enhance social justice.

The commission calls for enforcement of a provision for companies who violate contractual responsibilities by way of workers' pay and conditions to be banned for five years from bidding for any new contacts.