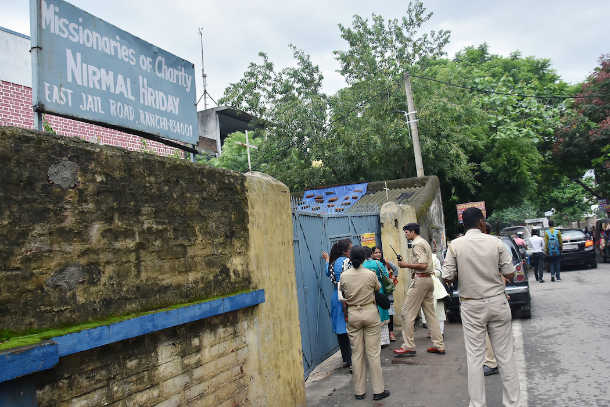 This photo taken on July 4 shows Indian police gathered outside the premises of Mother Teresa's Missionaries of Charity where a staff member and a nun worked before their arrest over illegal adoption charges in Ranchi in India's eastern Jharkhand state. (Photo by AFP)

A federal ministry in India has ordered inspections of all childcare homes run by Missionaries of Charity, the congregation founded by Mother Teresa, after a nun was accused of selling babies for adoption.

The Ministry of Women and Child Development said in a statement on July 16 that its move followed the recent case of alleged illegal adoptions carried out by Nirmal Hriday (tender hearts) home for unmarried mothers run by Missionaries of Charity in Ranchi in Jharkhand state.

Minister Maneka Gandhi has asked all states to get homes run by the congregation inspected immediately.

Sister Concelia Balsa and social worker Anima Indwar were arrested on July 4 after a childless couple complained to the state's Child Welfare Committee that Indwar took money to provide a baby but failed to keep the promise. They were accused of having already sold three babies from the home.

Indwar reportedly confessed to police that she took money for the baby.

"We are fully cooperating with the investigations and are open to any free, fair and just inquiry," Sister Mary Prema Pierick, the congregation's superior general, said in a July 17 statement.

She said Indwar, who had worked at the home for six years, enjoyed the trust of Sister Concelia, who was in charge of the unmarried mothers section.

The nuns, when busy with other work, allowed Indwar to escort unwed mothers to take their babies to the Child Welfare Committee's office. The nuns had no facility to verify if a baby had been surrendered because "as a matter of practice" the government office would not acknowledge taking custody of a baby from an unwed mother, Sister Prema said.

Media reports said Indwar, the baby's mother and a guard at the home jointly took money to sell the baby in question.

"We have full faith in the courts of law and the investigating authorities and are confident that justice shall prevail," said Sister Prema's statement.

Father Peter Martin, a lawyer who is helping Missionaries of Charity, said the federal move to inspect all the congregation's homes was the "latest in a series of probes we are facing."

State police chief D.K. Pandey wrote to the federal home secretary on July 11 urging him to freeze the congregation's bank account to facilitate an investigation into whether there were violations of regulations covering acceptance of foreign funding.

Church leaders say the government headed by the pro-Hindu Bharatiya Janata Party is using the case to tarnish the image of Missionaries of Charity and the entire Christian community.

"Many myths are being spread, information distorted and false news being diffused, and baseless innuendos being thrown about regarding the Mother Teresa sisters," Sister Prema said.

The congregation "vows to continue its wholehearted and free service to the poorest of the poor" even in the "middle of the unprecedented and unfounded criticism that it faces today," Sister Prema said in her statement.