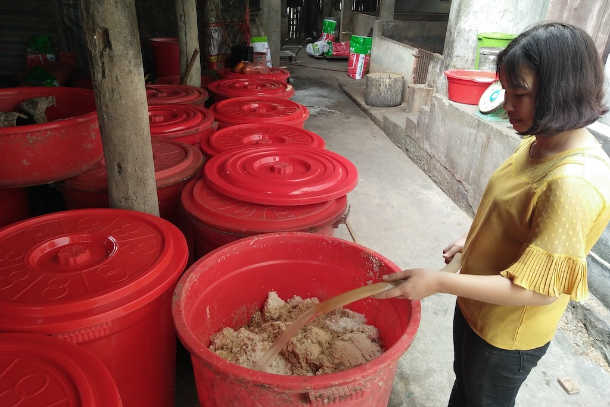 An alcohol producer in Yen Bai province keeps rice in plastic containers for fermentation before distilling. (Photo by Dominic Tran)

Ha, who weighs 38 kilograms and suffers from kidney and stomach disorders, also joins his friends and neighbors to drink alcohol at social occasions.

“I could not live without liquor. I consume 1.5 liters a day,” says the 44-year-old Catholic, adding that he drinks four to five times a day and even as late as midnight because of his craving for liquor. He took to drink after his marriage broke up.

His wife, Mary Tran Thi Luyen, says she divorced him last April after an 18-year marriage because she could not bear his alcohol abuse and violence.

“He drank too much liquor, did nothing to support the family and regularly cursed and beat my son and me when he was drunk,” says Luyen, who collects used items for a living.

She says local government officials and priests failed to advise her husband to keep off stiff drink.

Luyen, 38, blames her husband’s alcohol addiction on the rampant production and sale of liquor in Vinh Quang parish in Van Chan district of Yen Bai province, which is home to many Catholics.

Local people have produced homemade rice liquor for half a century. Each liter costs 10,000 dong (43 US cents) and everyone can purchase it.

Hai Yen, who has distilled rice liquor for five years, says the parish has at least 50 families producing cheap liquor for a living. Local officials never curb production or check the quality of liquor made from low-grade rice.

Yen, who learned how to make liquor from her mother-in-law, distills 160 liters of liquor per day to meet high demand over the Tet (Lunar New Year) festival. Many families buy 20 liters of her liquor to drink during Tet.

The mother of one earns 400,000 dong (US$17) a day from producing liquor, double the income of regular laborers. She also uses alcohol waste to feed 20 pigs to add to her income.

She says local people including ethnic villagers with low incomes only use cheap alcohol of low quality. At least 10 people from the parish die of diseases and road accidents caused by drinking each year, while many marriages break up due to alcohol problems.

Yen says she cannot abandon her job because alcohol production and raising pigs have provided the main income of local people for the past century. They have little land for cultivation. She places a limit on alcohol sales to abusers.

On Jan. 28, the Ministry of Industry and Trade said authorities could not control fake drinks and spirits with cheap prices which spread on markets before Tet.

The Health Ministry recorded over 2,700 people hospitalized due to alcohol poisoning in 11 months of 2018, with 15 of them dying. That is a huge leap from the 115 people who were hospitalized in 2017.

Anna Tran Thi Nhi, 75, saw her four sons become addicted to alcohol, with two of them breaking up with their wives. Her husband died from alcoholism.

The mother of eight says her sons have ignored faith practices for years and left their children to her care.

“It has destroyed the health, happiness and faith of our family,” Nhi says in tears. “We are very worried about our community’s development in the future.”

Father Joseph Nguyen Trong Duong, who provides pastoral care to the parish, says the parish has some 100 families aged 20-50 who are divided or divorced by mainly alcohol abuse and domestic violence. Many aged 30-50 die from excessive drinking.

“We try to educate people in catechism courses and Masses to keep their health and family happiness by avoiding alcohol,” he says.

But the fact remains that most alcohol abusers ignore his advice. The priest, who serves many parishes and subparishes, admits that church officials have no way to help abusers undergo detoxification.