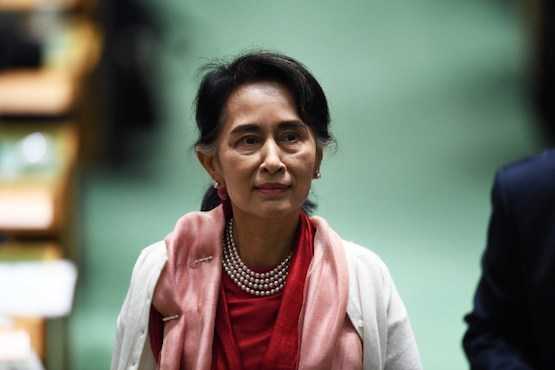 Myanmar's State Counselor Aung San Suu Kyi has met four Kachin bishops to discuss prospects for peace in the country's north where there has been fighting between the military and ethnic armed groups.

For an hour the bishops discussed with Suu Kyi the situation in Kachin and northern Shan states where ethnic groups have been fighting Myanmar's military.

Since August, the military has conducted an offensive in Kachin State using airstrikes and heavy artillery, resulting in thousands fleeing their homes near Laiza, the headquarters of the Kachin Independence Army.

Bishop Raymond Sumlut Gam of Bamaw Diocese in Kachin State said the bishops told Suu Kyi how the continued fighting was further destabilizing efforts to bring peace to the country.

Bishop Philip Lasap Za Hawng of Lashio, northern Shan State, said that he was concerned for the safety of civilians as shells have landed near camps for internally displaced people.

The bishops said they told Suu Kyi that the Catholic Church supported her 21st Century Panglong peace conference and that all people of Myanmar, including the Kachins, long for a durable peace.

The peace process is a priority for the Nobel Peace Prize winner who initiated the conference held in August to begin a process aimed at ending decades of internal conflict.

"Suu Kyi also appealed to us to tell the people to have patience with the transition to democracy and to have trust and confidence in the groups pursuing peace," said Bishop Gam.

Suu Kyi added that all stakeholders would need to take a calculated risk to enter the peace process to end the decades-long fighting, according to the bishop.

Retired Archbishop Paul Zinghtung Grawng of Mandalay said both sides — the military and ethnic armed groups — need to sit at the negotiation table and solve the problem instead of clinging to their own demands.

The renewed fighting in Kachin and northern Shan states is also a blow to Suu Kyi's government as the next Panglong peace conference is scheduled for February.

The Nobel Laureate has pledged to end hostilities in the country, which has been bedeviled with conflict for nearly 70 years.

Win Htein, a spokesperson of the ruling National League for Democracy party, said Suu Kyi will be pushing for peace no matter what challenges she faces.

"We need the military's cooperation as it is the key player and its collaboration will speed up the peace process," Win Htein told ucanews.com.

Observers say the military remains powerful in the civilian-led government and has taken up the recent offensive to put pressure on Kachin fighters to sign a ceasefire agreement.

Sporadic fighting has occurred in Kachin State between the military and the Kachin Independence Army since 2011, displacing about 100,000 people.

Most of the state's 1.7 million people are Christians and 116,000 are Catholics.