Alarm over surge in drink consumption

Vietnam's alcohol rates are no cause for cheers 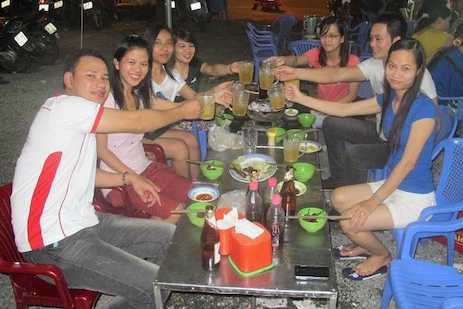 Consumption has rocketed in recent years, especially among the young.

A survey last week revealed Vietnam to be Southeast Asia’s heaviest consumer of beer. According to Euromonitor International, Vietnamese drank 2.6 billion liters of beer in 2011, followed by Thailand (1.8 billion liters) and the Philippines (1.6 billion liters). This is a sudden and sizeable surge in Vietnamese consumption. Having been rapidly increasing for several years, it has jumped by a billion liters since 2009. Authorities have expressed concern over the spread of “drinking culture,” especially among young, urban people. They also say the fast-growing taste for alcohol has brought a raft of social problems. These were highlighted two weeks ago by the case of 30-year-old Ly A Hop, a respected local official in the Bat Xat district of Lao Cai province. When he came home drunk and his 26-year-old wife refused to have sex with him, he allegedly asphyxiated and raped her, then threw her body into a nearby pond. While this instance is extreme, it is by no means exceptional. Alcohol is also a major cause of road accidents in the country. Surveys estimate that more than 30 percent of fatalities and up to 60 percent of hospitalizations involve alcohol consumption above the legal limit. Now the government is tackling that aspect of the problem, by stiffening the penalties for driving under the influence of alcohol. From November 10, fines for exceeding the legal limit will be 250 percent higher than before. A hard-hitting social marketing campaign by the National Traffic Safety Committee and World Health Organization on the dangers and consequences of drink driving will be aired until the end of 2012. Dr Takeshi Kasai, the WHO representative in Vietnam, hailed the initative this week. “The causal relationship between alcohol and road trauma is well established and for the majority of adults, a few drinks in a short space of time is all it takes to seriously impair driving ability,” he said.