Emmanuel Milingo, the former Catholic archbishop excommunicated in 2006, has appointed an African to succeed him as head of the International Married Priest Prelature of St. Peter and Paul.

Milingo, former archbishop of Lukasa, Zambia, scandalized the Catholic Church in 2001 after he married Maria Sung, an acupuncturist linked to the Rev. Sun Myung Moon's Unification Church. The Vatican excommunicated Milingo in 2006 after he consecrated four men as bishops.

He has picked Peter Joseph Kaloki Ndambuki, 78, a former Kenyan Catholic priest, as the group's new leader, saying he had demonstrated the charisma of married priesthood and faithfulness.

Ndambuki is one of the founders of the married priests' group.

"I am humbled that God as found me fit for the task. I will strive to unite the group and make the issue of married Catholic priests more understood. The issue attracts a lot of unnecessary hostility," Ndambuki told Catholic News Service July 23.

Ndambuki married in 1986 and joined Milingo's group in 2010. The coronavirus pandemic restrictions have delayed his installation.

Ndambuki said Milingo, now 90, is ailing, cannot walk and spends most of the time in bed. 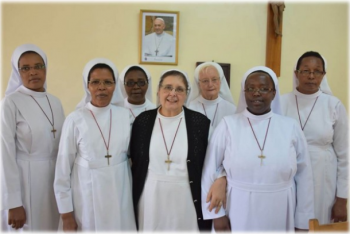