Successive governments failed to stem a creeping tide of Islamization 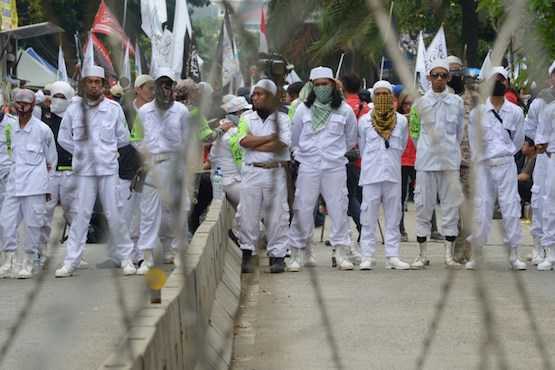 Indonesian Muslim protesters hold a rally during the trial for Jakarta governor Basuki Tjahaja Purnama, also known as "Ahok," outside the North Jakarta court on May 9. The Christian governor was jailed for two years after being found guilty of committing blasphemy, capping a saga seen as a test of religious tolerance in the country. (Photo by Adek Berry/AFP)

The North Jakarta District Court's May 9 decision to sentence ethnic-Chinese Jakarta Governor Basuki "Ahok" Purnama to two years' imprisonment goes far beyond simply appeasing the conservative Islamic lobby which has been baying for his blood these past six months.

Rather, in ignoring the downgrading of the charge from blasphemy to insulting Islam — and ordering Purnama's immediate arrest — it creates the inevitable perception that the judiciary has become part of rising intolerance in Indonesian society.

Indonesia is a long way from becoming another Saudi Arabia but religious and political leaders have done little over the past 17 years of democratic rule to stem a creeping tide of Islamization that runs counter to the country's secular constitution.

Indeed, it gained so much ground during the decade-long presidency of Susilo Bambang Yudhoyono that the 30-month-old current Joko Widodo administration is now struggling to find ways to bring it under control.

The Purnama trial exemplifies it.

Prosecutors acknowledged they had insufficient evidence to convict the governor of blasphemy just a day after he was soundly beaten by former education minister Anies Baswaden in the April 19 gubernatorial election.

Most analysts put his loss down to the four-month-long trial and a series of mass demonstrations and street rallies unleashed against the Christian governor by an alliance of self-serving political rivals and hard-line Islamic groups.

Now unable to serve out his remaining six months in office, Purnama is likely to be detained throughout the appeal process, which legal analysts say could still see the decision reversed, purely on the grounds that the lower court ruled on something it was not asked to.

They believe the Supreme Court could either quietly uphold the appeal or reduce the sentence to the two-year period of probation the prosecution asked for when tensions surrounding the case had subsided later in the year.

The outspoken Purnama has largely himself to blame for quoting a verse in the Quran that handed Islamists and their new-found political cohorts a potent weapon.

However, the whole affair raises the possibility of the same alliance using other controversial issues in future to exploit the democratic process on a wider stage where the stakes are much higher.

Sources close to the palace say President Joko Widodo was "upset" and "disappointed" over the court's decision, perhaps because of his inability to use his popularity and powers to influence the result.

He may also be re-thinking his re-election strategy for 2019 given the failure of his ruling Indonesian Democratic Party for Struggle (PDI-P) to help Purnama across the line at the time when he needed a leg-up the most.

It is understood a significant number of party cadre, that PDI-P leader Megawati Sukarnoputri drafted in from outside the capital to boost the campaign, spent more time in entertainment places than working in their assigned areas.

A similar lackluster performance in 2014 almost cost Widodo the presidency in a tight race with opposition leader Prabowo Subianto whose support for Baswaden has emboldened him to consider another bid.

While Widodo is a Muslim, there are concerns his political rivals and their conservative Muslim allies will reignite false rumors spread during the 2014 election that his parents were members of the banned Communist Party of Indonesia.

If the dynamics were markedly different from those of a national poll, the Jakarta election still demonstrated how easily Indonesian voters can be led, especially on religious and ideological issues.

The shock North Jakarta Court decision came only a day after the Government announced it would impose a permanent ban on Hizbut Tahrir Indonesia (HTI) for promoting a philosophy that contradicts Pancasila, the state ideology.

HTI was not a prominent member of the anti-Purnama coalition but National Police Chief Gen. Tito Karnavian and Political Coordinating Minister Wiranto say the organization's support for an Islamic caliphate has disrupted social order.

HTI functions in more than 40 countries, including Australia and Britain, but is banned in Muslim-majority states like Jordan, Egypt, Saudi Arabia, Turkey and Uzbekistan.

The government has been criticised for imposing the ban before going through the prescribed legal steps which must be taken before it becomes official and which may become problematic in view of the Purnama verdict.

A former armed forces commander, Wiranto warned that any organization opposing Pancasila should be dissolved, signalling the start of wider government efforts to rein in extremists ahead of the 2019 national elections.

The government does, however, make a clear distinction between groups promoting the creation of a caliphate and those pushing openly for the implementation of Shariah law.

Indonesia's two Shariah-based parties, Justice and Prosperity and United Development have collectively won no more than 12-13 percent of the national vote in the past three legislative elections.

While successive Indonesian governments have been slow to react to hate speech and violence against minorities, they have always taken a stern approach to anything that presents a direct challenge to the state itself.

Former head of the Detachment 88 anti-terrorist unit Karnavian has been at the forefront of the anti-Islamist campaign since he was appointed police chief last year over the heads of more senior officers, many of whom had links to the violence-prone Islamic Defenders Front.

The palace is now looking ahead to what it feels will be a major pre-election test of Widodo's popularity: the April 2018 gubernatorial election in West Java, the country's most populous province surrounding the Indonesian capital.

Two-term incumbent Ahmad Heryawan, a member of the opposition Justice and Prosperity Party cannot run again, but there are indications his wife may try to succeed him in a contest with progressive Ridwan Kamil, Bandung city mayor.