A day after electoral, prosecutors backpedal and recommend suspended sentence Prosecutors have downgraded blasphemy charges against Jakarta's Christian Governor Basuki Tjajaha Puranama, popularly known as Ahok, but will proceed with a lesser charge and recommend that, if found guilty he will serve no prison time.

The backflip came April 20, a day after Ahok was defeated in his bid to be reelected for a full six year term by rival Anies Baswedan, who rode to victory on surging pro-Muslim sentiment exploited by his backers.

Mass protests over the past six months organized by the Islam Defenders Front, a radical group whose membership has swollen to over 6 million, initially led to the blasphemy charges being investigated.

The cause was an incident in which Ahok, a famously feisty politician of Chinese descent, allegedly told voters not to rely on the Quran.

Analysts believe that the charges and the pro-Muslim and anti-Chinese sentiment, something that has blighted Indonesia society for generations, was a key factor in Ahok's electoral defeat.

Prosecutors were unable to find enough evidence to bring charges under the anti-blasphemy laws, instead saying they would seek a one-year jail sentence for a charge of harassment of ulemas (Muslim clerics).

They also said they would recommend that Ahok be granted a two-year probationary period, if he was found guilty, meaning he would serve jail time if he reoffended under the same law.

"If there is no evidence, we have no more comments about it," Humphrey Djemat, a member of Ahok's lawyer team, told reporters after the hearing.

However, he added, the prosecutors' sentence was based on Article 156 of the Criminal Code relating to insulting a certain group on the basis of religion, race or ethnic background.

"If it is related to the statement issued previously by the Islamic Ulema Council, the article refers to an insult to ulemas. That is what the prosecutors said." 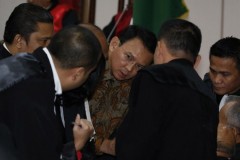 I Wayan Sudirta, another member of Ahok's lawyer team, said the prosecutors' sentence will not affect Ahok's responsibility as a governor. "He will continue to work as governor until October," he told ucanews.com.

Protestors outside the court were furious and Ade Irfan Pulungan, a member of pro-Islam lawyer group Advokat Cinta Tanah Air (lawyers who love the nation), was disappointed with the sentence.

"It is very disappointing. Prosecutors should give a tougher sentence to the defendant. Their position is to see the defendant guilty," he told ucanews.com after the hearing.

"The prosecutors' demand sentence is ridiculous. This is the first time in our history that prosecutors give a very light sentence to a defendant of a blasphemy case. This is the worst thing to ever happen here," he said.

Ahead of the trial, Ahok met with Aines Baswedan at City Hall to formally congratulate him on his victory.

The trial will continue April 25 when Ahok's lawyers give his defense. A verdict in the trial is expected towards the middle of May.