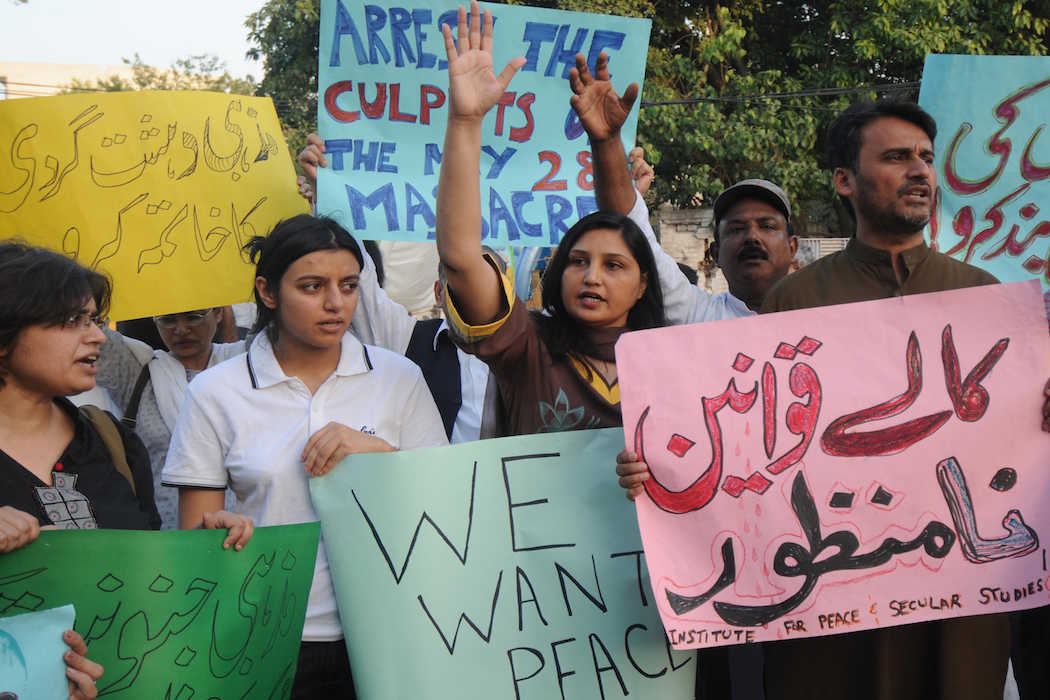 Pakistani civil rights activists protest the killings of Ahmadis outside a mosque in Lahore in May 2010. More than 80 people died when militants burst into prayer halls firing guns, throwing grenades and taking hostages. (Photo by Arif Ali/AFP)

It has been four years since the media section of the Ahmadi community started sending me regular monthly reports about their persecution in Pakistan.

Their latest press release was issued on May 24 after about 35 members of the municipal committee of Sialkot city in Punjab province demolished a house of great historical significance to members of the Ahmadi community all over the world. Later a mob of about 600 men demolished a nearby Ahmadi place of worship.

"We thank city authorities and all the Sunni organizations that participated. As Muslims, it was our duty to complete the work. We want to demolish other minarets. May Allah crush the fitna [corruption] of the Ahmadis. They are enemies of Islam and Pakistan," stated Hafiz Hamid Raza, the mob leader, in a video message.

"Allahu Akbar [God is great]. If anyone dares to condemn or register a case against our activists, we will block the whole city."

The video was widely shared on social media.

In a recent seminar, a well-known speaker warned the Christian gathering from siding with Ahmadis.

"We have no right to interfere in the religion of the majority. We protested against a change to national identity cards, but that move was meant to single out Ahmadis," he said.

Bishop John Joseph, the first chairman of the Catholic Bishops' National Commission for Justice and Peace (NCJP), led a protest in 1992 when the government attempted to list the holder's religion on identity cards.

"Christian settlements have been burned and attacked by mobs since 1997. Hindus, the largest religious minority, were never targeted. We gain attention for being the most outspoken religious minority in the country," he said.

Ever since being declared non-Muslims through a constitutional amendment in 1974, Ahmadis have become the most persecuted minority in Pakistan. Four Ahmadis were murdered in hate crimes and 77 were booked under discriminatory religious laws in 2017. The number killed since 1984 stands at 260.

No arrests have been made in the Sialkot case. Most attackers and arsonists in such cases are usually released on bail.

The protest against including religion on identity cards is one of the NCJP's few success stories. Ahmadis have been abandoned by both state and society. Given the sensitivity of blasphemy in Pakistan, the minority Catholic Church cannot afford to publicly support the Ahmadi community.

However, there are other ways the church can play her role as a peacemaker, an agent of reconciliation and a herald of justice. Christ's words "You are the salt of the earth ... you are the light of the world" encourage us to lobby for reconciliation, justice and peace as a testimony to authentic Christian living.

All the encyclical letters and apostolic exhortations to interreligious dialogue by recent popes have called for transmitting the Good News to all humanity.

"She [the church] feels the duty to be present wherever human suffering exists and to make heard the silent cry of the innocent who suffer persecution, or of peoples whose governments mortgage the present and the future for personal interests," stated Pope Benedict XVI in Africae Munus (2011).

The Church of God can only build a reconciled Pakistan by pursuing the paths of truth and justice, love and peace. Her far-sighted vision can help in saving both vulnerable religious minorities and the image of Pakistan itself. The gross violation of human rights will benefit nobody.

Ahmadis may be the first to be targeted but they won't be the last. Staying silent on Ahmadi slaughter cannot guarantee protection of Christians or any other minority in Pakistan.

In his address to representatives of different religions at the Vatican in 2016, Pope Francis explicitly described the path we must take.

"It is horrible that at times, to justify such barbarism, the name of a religion or the name of God himself is invoked. May there be clear condemnation of these iniquitous attitudes that profane the name of God and sully the religious quest of mankind. May there instead be fostered everywhere the peaceful encounter of believers and genuine religious freedom," he said.

Ahmadis are facing a difficult, disturbing and tragic situation. It is the church's public role to condemn violence against any community. The popular church-run schools in Pakistan offer hope to combat growing religious fundamentalism born out of illiteracy. In the words of His Holiness, "together we must say no to hatred, no to revenge and no to violence."

Kamran Chaudhry is a Catholic commentator in Lahore.