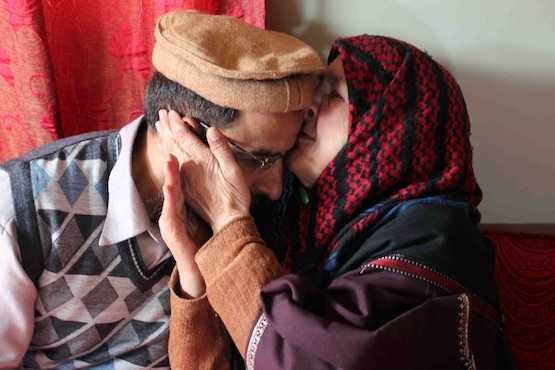 Mohammad Hussain Fazli's mother kisses him at their house in the outskirts of Srinagar. After being jailed for 12 years for a 2005 terror act in New Delhi he was acquitted of charges in February. (Photo by Umer Asif)

Mohammad Hussain Fazli stared through the window at the children playing cricket on his lawn, cheering at each run they make.

Fazli, now a free man after spending 12 years inside India's most fortified prison in New Delhi, is still confined. It has been two weeks since he was released but he has not dared step out of his single-story house in Srinagar, capital of India's only Muslim-majority Jammu and Kashmir state.

So much has changed in the 12 years since Fazli was incarcerated that he cannot leave for fear of losing his way because he cannot recognize the streets and roads of his home town. Nor can he recognize the faces of young relatives who have now grown up.

Police arrested Fazli in November 2005, days after a series of bomb blasts in New Delhi killed 67. He and two others, Rafiq Shah and Tariq Dar were accused of carrying out the attack.

A Delhi court on Feb. 16 acquitted Fazli and Shah of all charges, saying the prosecution failed to prove the allegations, and set them free.

Dar was found guilty of being a member of a militant outfit but released seeing as he had already spent more than 10 years in jail, the maximum punishment prescribed.

Freed after 12 years, Fazli wanted to know who will give him back the 12 years he lost and who will compensate him for the agony he underwent. "I was arrested for being a Muslim and a Kashmiri. A Kashmir Muslim is guilty until proven innocent," Fazli told ucanews.com.

A carpet weaver, Fazli also ran a madarasa, (Quranic school) at the time of his arrest. "I barely had any idea that my leanings towards Islam would destroy my life. I feel sad about those killed in the Delhi blasts but how can one arrest an innocent man?" said Falzi.

Prakash Karat, a communist leader, said "judicial verdicts have shown a pattern of rounding up innocent Muslim youth and charging them whenever a terrorist blast occurs."

Kashmir-based independent legislator Abdul Rashid told ucanews.com that the case of Fazli and Shah shows how security agencies fabricate false cases against Kashmiris. "The million-dollar question is who will compensate these innocents for 12 years wasted?" he said.

Rashid said many more Kashmiri innocents are "languishing in torture cells and notorious jails for no fault of their own." He said most Indians impulsively associate terrorism with Muslims and most often with Kashmir Muslims.

This is due to a section of Muslims in Jammu and Kashmir state taking up arms in a separatist struggle. The three-decade-old uprising has killed an estimated 100,000 people, including civilians, security forces and militants.

India claims militant insurgents from Pakistan-occupied areas of Kashmir are behind the militancy in the region plus the occasional terror attacks in other Indian cities, an allegation Pakistan rebuffs as baseless.

Shah, who was just 20 when arrested, said the greatest compensation to him "would be not to arrest any innocent people on fabricated grounds." Shah said young people like him are suspected of supporting militant separatist organizations who are looking for chances to avenge action by Indian security forces.

Shah said he was tortured, "both physically and mentally during all these 12 years for being a Muslim and a Kashmiri."

"I had no sense that I would be arrested. Linking me to a crime that I was not even aware of was a clear sign that I was picked up purely on a suspicion cast on all Kashmiri young people," Shah told ucanews.com.

Shah was the student of Islamic Studies at the University of Kashmir and university records showed he was present at university when the blasts in New Delhi occurred. But police ignored the records, his family said.

His mother Mehbooba Yassin said her son "was in his classroom in Kashmir when the blasts happened that day. This is a mockery. The police and justice system arrested an innocent and after a decade, they say sorry."

Shah said the 12 years of detention will "haunt me until death but I have to get over it. I will pursue a PhD in Islamic studies and want to become a teacher," he said.

According to rights activist and Supreme Court lawyer Bhim Singh at least 400 Kashmiri youth are awaiting trial and languishing in several jails of India. "Their only fault is that they are Kashmiris and Muslims," he told ucanews.com.