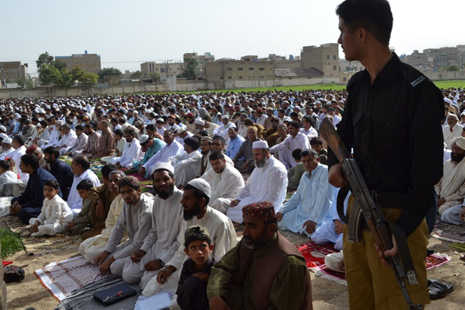 Devastated by a spate of terror strikes and rain-triggered floods during the fasting month of Ramadan, millions of Pakistanis on Friday began celebrating the annual Muslim festival of Eid-ul-Fitr.

Hundreds of thousands of Muslims thronged to mosques across the country to start the day with prayers amid tight security, with all major mosques guarded by police.

In Pakistan’s Balochistan province, the day began with yet another gun assault that left 10 people killed outside a mosque on the outskirts of Quetta. Hours later, police claimed to have apprehended the suspected attackers.

“Eight suspects have been arrested and their weapons have been seized. They wanted to target former provincial minister Ali Madad Jatak,” said Bashir Barohi, a senior police official.

This comes a day after a suicide bomber blew himself up at a funeral in Quetta, killing at least 38 people, mostly police officers. The deadly attack also marked the end of a bloody Ramadan in Pakistan.

In addition to acts of terrorism, floods triggered by heavy monsoon rains also killed 84 people across the country and displaced over 81,000 others, according to figures released by National Disaster Management Authority (NDMA). The floods also damaged thousands of acres of crops and hundreds of homes, it said.

“Terrorist attacks have become a daily occurrence. The new government appears to be more inept than the previous one,” Rao Shafiq ur Rehman, a bank employee in Multan, said. “We had a lot of expectations, but not anymore. God save this country.”

“I have stopped watching TV news channels due to the unending coverage of violence. It only leads to depression and tension,” Samina Khan, a housewife, said.

Meanwhile, celebrations are going on in much of the country with traditional Eid dishes and family gatherings. While elders enjoyed special foods, young children received traditional gifts of money known as Eidi and gifts from their parents and other relatives.

In a special Eid message, Pakistan Prime Minister Nawaz Sharif Thursday urged the nation to forge unity on a national agenda against extremism and terrorism. “It was unfortunate that in this holy month of Ramadan, some elements have killed innocent people,” he said.