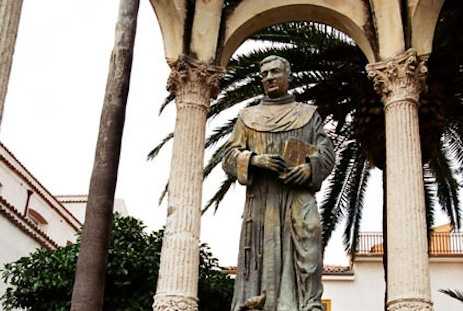 A bronze statue of Venerable Gabriele Allegra in Acireale, Sicily

After a delay of 10 years, the beatification cause of Venerable Gabriele Maria Allegra (1907-1976) is scheduled for completion next month. He will be the first person from the Hong Kong diocese and the Franciscan province of Taiwan-Hong Kong to be so blessed. The Italian friar was best known for producing the first full translation of the Catholic Bible in Chinese, which has led to him being known as the “St. Jerome of China.” The beatification ceremony will take place on September 29 at the Cathedral of Acireale, in his home town of Catania in Sicily. Father Joseph Ha, who heads the Order of Friars Minor in Hong Kong, said the news was “a surprise to many of us.” When asked if Sicily has been chosen as the venue for the ceremony in order to avoid provoking the Beijing government, he said it was “a good guess, very reasonable.” Cecilia Chui of the Hong Kong Catholic Biblical Association described the beatification as an honor to Chinese Catholics worldwide. “We feel gratified and proud,” she said. “It is very meaningful that the Holy See beatifies Venerable Allegra in chorus with the Second Vatican Council’s 50th anniversary this year.” Venerable Allegra and his colleagues published the Chinese Bible in 1968, three years after Vatican II promulgated Dei Verbum (Dogmatic Constitution on Divine Revelation), which stated that “easy access to sacred scripture should be provided for all the Christian faithful.” The Studium Biblicum version, considered to be the most faithful to the original manuscript, is still the main Chinese version used today. “Its publication had a far-reaching significance for the promotion of biblical ministry in Chinese-speaking Catholic communities around the world,” said Chui, who also serves as liaison secretary for the Biblical Servicing Center of the United Chinese Catholic Biblical Association. The beatification was originally set for October 2002, after the Holy See had certified a miracle attributed to Venerable Allegra’s intercession. However, the ceremony was then postponed indefinitely. Since then, the Hong Kong diocese and the Order of Friars Minor made numerous requests to the Vatican to resume the process, without success.  Fr. Ha said he did not know why the Holy See has now decided to go ahead. “The Vatican postponed the beatification in 2002 so as not to further provoke negative response from the Chinese government after the canonization of the Chinese martyrs in 2000,” he said. Arriving China in 1931, Venerable Allegra made the translation of the Bible from the original Hebrew, Aramaic and Greek into Chinese his life’s work. He also set about producing an accompanying commentary and introduction. He instituted the Studium Biblicum in Beijing in 1945 to pursue these tasks. It relocated to Hong Kong three years later because of political turmoil. Between 1961 and 1963, he went to Singapore to head a social center established by the Vatican, which aimed to write and distribute anti-communist literature in Asia. He died in Hong Kong in 1976. The local Bishop John Baptist Wu applied for his canonization cause in 1984 and the Holy See declared him Venerable Servant of God 10 years later. The Hong Kong Franciscans will organize a prayer meeting on September 29 and a memorial Mass on October 4 to celebrate his beatification. Two pilgrimage groups will set off to Acireale to join the ceremony. Related reports Chinese Bible scholars to meet in Malaysia Italian Missioner Who Translated Bible Into Chinese Honored On 100th Anniversary Of Birth Catholic Biblical Federation To Focus On China