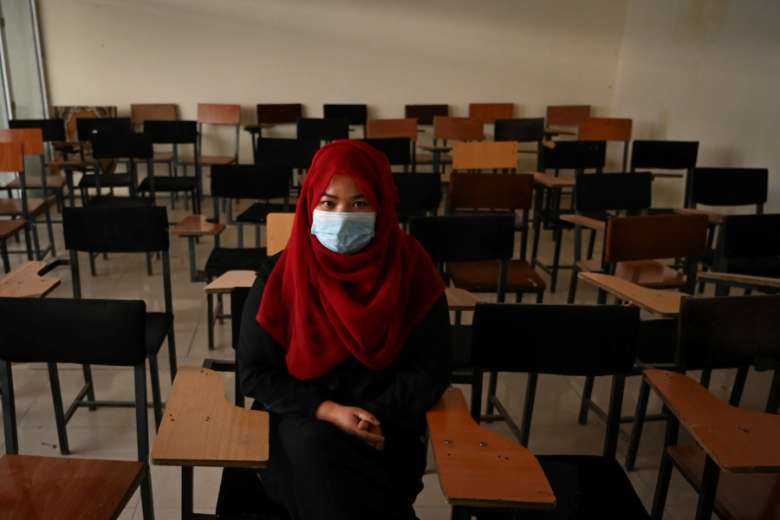 A student sits inside a classroom after private universities reopened in Kabul on Sept. 6. (Photo: AFP)

Universities in Kabul were almost empty on the first day of the Afghan school year as professors and students wrestled with the Taliban's restrictive new rules for the classroom.

The Taliban have promised a softer rule than during their first stint in power from 1996 to 2001 when women's freedoms in Afghanistan were sharply curtailed and they were banned from higher education.

This time the hardline Islamist group have said women will be allowed to go to private universities under the new regime, but they face tough restrictions on their clothing and movement.

Women can only attend class if they wear an abaya — a flowing robe — and a niqab — a face veil with a small window to see through — and are separated from men, the Taliban said.

"Our students don't accept this and we will have to close the university," said Noor Ali Rahmani, director of Gharjistan University in Kabul, on an almost empty campus on Sept. 6.

"Our students wear the hijab, not the niqab," he added, referring to a headscarf.

We also said that it is not real Islam, it is not what the Quran says

The Taliban education authority issued a lengthy document on Sept. 5 outlining their measures for the classroom, which also ruled that men and women should be segregated — or at least divided by a curtain if there are 15 students or less.

"We said we didn't accept it because it will be difficult to do," Rahmani told AFP. "We also said that it is not real Islam, it is not what the Quran says."

From now on at private colleges and universities, which have mushroomed since the Taliban's first rule ended, women must only be taught by other women, or "old men", and use a women-only entrance.

They must also end their lessons five minutes earlier than men to stop them from mingling outside.

So far, the Taliban have said nothing about public universities.

For some students, however, it was a relief that women would still be able to attend university at all under a new Taliban regime.

Zuhra Bahman, who runs a scholarship programme for women in Afghanistan, said on social media she had spoken to some of the students.

"They are happy to go back to university, albeit in hijab," she said. "Taliban opening universities for women is a key progress. Let's continue to engage to agree on other rights and freedoms."

Jalil Tadjlil, a spokesman for Ibn-e Sina University in the capital, said separate entrances had already been created for men and women.

"We didn't have the authority to accept or reject the decisions that have been imposed," he told AFP, blaming the "ongoing uncertainty" for the lack of students.

The university posted a picture online of male and female students separated by a curtain.

Images shared on Facebook by its department of economics and management showed six women wearing the hijab and 10 male students with a grey curtain running between them, as a male teacher wrote on a whiteboard.

It can be dangerous at checkpoints. The Taliban can check their phones and computers

Usually, campus corridors on the first day of the term would be packed with students catching up after the summer.

But on Sept. 6, there was a strikingly low turnout at Kabul's universities, leaving education leaders wondering just how many young, talented people have fled the country as part of the "brain drain".

Rahmani said only 10-20 percent of the 1,000 students who enrolled last year came to Gharjistan University on Monday, although there were no classes scheduled.

He estimated up to 30 percent of the students left Afghanistan after the Taliban seized control in the middle of August. "We have to see first if students come," he said.

Reza Ramazan, a computer science teacher at the university, said women students were particularly at risk when traveling to campus.

"It can be dangerous at checkpoints," he said. "The Taliban can check their phones and computers."

"Many students are not interested anymore in studying because they don't know what their future will be," he said. "Most of them want to leave Afghanistan."