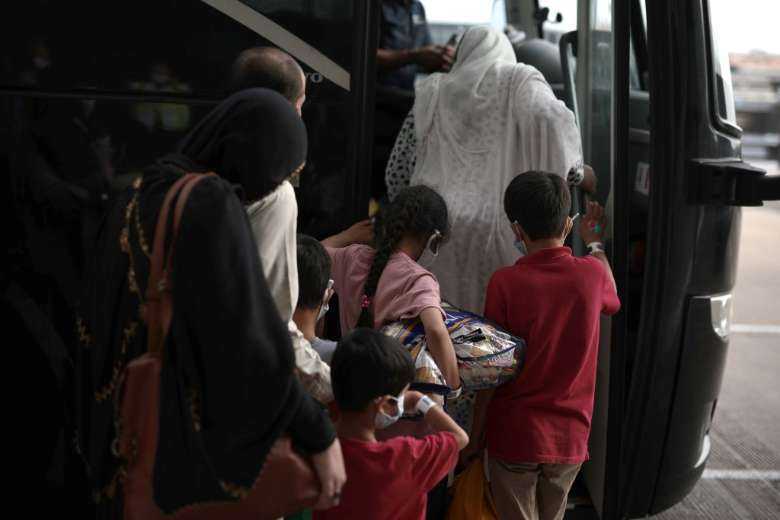 A family board a bus at Dulles International Airport in the US on Aug. 31 to be taken to a refugee-processing center after being evacuated from Kabul following the Taliban takeover of Afghanistan. (Photo: AFP)

When the Taliban began taking control of Afghanistan in mid-August, "in one night, everything changed," recalled Adam.

Adam, his wife and their 7-year-old son are three of the more than 150 Afghans whom Catholic Charities of the Diocese of Nashville have helped and will continue to help resettle in the next several months through the State Department's Afghan Placement Assistance Program.

At the beginning of September, the Department of Homeland Security implemented Operation Allies Welcome "to support vulnerable Afghans, including those who worked alongside us in Afghanistan for the past two decades as they safely resettle in the United States," according to the official Department of Homeland Security website, further leading to implementation of the placement program.

Since August 2018, Adam served as an Afghan interpreter for U.S. service members through the security office at the U.S. Embassy in Kabul, Afghanistan.

Because of his service to the U.S. troops, he requested his family's true identity remain anonymous to protect their loved ones who are still in Kabul.

"I loved working with the U.S. Embassy because of that diplomatic mission. That was very important for Afghans," Adam said. "At that time, I needed to work with them and to support them for their security, for everything. That diplomatic mission, that built our government, and I'm greatly appreciative that I worked with them."

The US Marine forces helped us, but they couldn't control the situation inside the airport. Even my son was very scared at the time

"We had a really nice life in Kabul. We had everything," he said. "We had an apartment; we had our own car. All of our families were very happy."

Adam said he was on duty like any other night, taking security instructions, checking posts, and even creating emails for other security guards so that they could communicate with their guard force commanders.

"We had intelligence reports that Kabul couldn't be safe," Adam told the Tennessee Register, Nashville's diocesan newspaper, so he decided "to create email addresses for each individual, so that they would be able to apply for the Special Immigration Visa program in the near future."

"The next morning, I came home, and my friend called me saying that our bank accounts will be closed," Adam said.

Sure enough, when he went to the bank later that morning, even with his ID card from the U.S. Embassy and mobile phone photos proving his identity, he was unable to withdraw funds. He was forced to leave behind three years of savings from his salary as an interpreter.

Adam later returned to the U.S. Embassy to retrieve another of his ID cards and saw more changes.

"The police were not wearing their uniforms, but they were holding their posts," he said. "I got permission from them to take my ID card because that was important for me, and I went back home. I was very afraid at that time."

Adam and his family spent three more nights in Kabul before his guard force commander called to say that he could go to the airport to leave. Unfortunately, only his immediate family could come with him, forcing him and his wife to both leave extended family members behind.

At the airport, "we had a very bad problem with the crowd of people," he said. "The U.S. Marine forces helped us, but they couldn't control the situation inside the airport. Even my son was very scared at the time. His shoes were gone, but he didn't mention that because he couldn't talk at that time."

"He was so afraid, and he couldn't even breathe," Adam's wife added.

The family spent a full 24 hours at the Kabul airport before they were able to fly out on a military airplane; they went without their belongings because their luggage was lost. That flight got them out of Kabul. They were at their next stop for 48 hours.

Because it took time to prepare sleeping arrangements in the airplane hangar, Adam and his family sat under the wings of the airplane to try to shield themselves from the hot sun.

Eventually, the family ended up at a U.S. air base in Germany for eight days and nights. From Germany, Adam and his family arrived at Fort Beckett, Virginia, where they were processed.

We can't sleep at night because of what happened. We wonder, 'What do they need? What will happen in the future for them?' It is a big problem for us

During processing, Afghans go through medical screenings, including testing for COVID-19, receiving vaccinations, applying for immigration status, and more as coordinated by the U.S. State Department.

After a month in Virginia, they headed to their final destination of Nashville, where they met with Catholic Charities at the airport Sept. 30. The agency has helped provide the family with an apartment, furniture, dishes and more.

Adam's brother has lived in Nashville since 2011 and also is helping the family get settled.

But they're still waiting for health care, food stamps and education opportunities.

"I know the process takes time, and Catholic Charities is helping with that," Adam said.

Additionally, Adam's work as an interpreter with the U.S. Embassy was not documented as it should have been by the Department of Homeland Security, which means he doesn't have the papers he needs to secure employment.

"That was not fair for me," he said. "I served three years. That should be documented."

They also still live in fear for the safety of their family back in Kabul.

"We can't sleep at night because of what happened," Adam's wife said. "We wonder, 'What do they need? What will happen in the future for them?' It is a big problem for us."

But Adam and his family remain hopeful and are grateful to be in a safe place.

"We hope to live happily and have everything we need soon," Adam's wife said, including schooling opportunities for all three of them.

Adam hopes to study anthropology and prepare for his dream career.