A Bangladeshi migrant raises his hand at police headquarters in Langkawi, Malaysia on May 11, after arriving on Malaysian shores earlier that day. Labor officials in Bangladesh hope to finalize a deal that would make it easier for migrants to legally find jobs in Malaysia. (Photo by Manan Vatsyayana/AFP)

A potential agreement between the governments of Bangladesh and Malaysia, which could pave the way for hundreds of thousands of Bangladeshis to legally work in Malaysia, may help curb deadly smuggling operations, advocates for migrants say.

Bangladeshi labor officials say the two countries are negotiating a deal that could see up to 1.5 million Bangladeshi workers sent to Malaysia over three years.

Abdur Rauf, joint secretary at Bangladesh's Ministry of Expatriates' Welfare and Overseas Employment, said officials hope to sign the deal later in October, though they are still waiting for approval from their Malaysian counterparts.

"We are ready for it, but it all depends on Malaysian authorities and they will take our people as they need," he told ucanews.com.

The agreement would see government agencies charge Bangladeshi workers about 36,000 taka, or US$450, to be placed in a job in Malaysia. Such a process would be conducted through official government channels, though private agencies may charge twice as much under the scheme.

Currently, many Bangladeshis choose to use dangerous underground trafficking networks to make the trip abroad.

For advocates who work with migrants, the potential deal represents a major step in addressing people smuggling operations, particularly in light of May's migrant boat crisis on the Andaman Sea. In May, thousands of Bangladeshi migrants and Rohingya asylum seekers from Myanmar were stranded on the high seas after human traffickers abandoned their boats following a regional crackdown on smuggling.

"The deal will have massive positive impacts on curbing illegal sea voyages to Malaysia," said Shyamol Chandra Mazumder, who is in charge of Caritas Chittagong's safe migration project.

"Most people in Bangladesh can pay the amount being fixed by the government, so they won't need to risk their lives trying to go to Malaysia anymore."

Caritas Chittagong covers Cox's Bazar district, which is a main departure point for many Bangladeshis trying to get to Malaysia by sea. 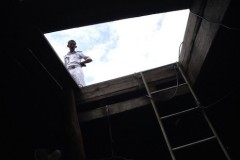 Advocates raise alarm for next influx of boat refugees in Malaysia

In the first six months of 2015, more than 30,000 Bangladeshi and Rohingya people risked the journey in smugglers' boats on the Bay of Bengal; 370 people died attempting the crossing, according to the U.N. Refugee Agency.

Observers are also warning that the imminent end of the monsoon season in the region — and with it, better sailing conditions — will trigger a new wave of migrants and asylum seekers.

However, officials in Malaysia must still approve the deal. When Malaysian authorities outlined the agreement in June, some labor groups were opposed, fearing the effect of an influx of foreign workers on the domestic labor market, according to Malaysian media.

While the potential Bangladesh-Malaysia deal may be an important step, making sure it is correctly implemented will be just as vital.

Under a previous agreement between the two countries, Bangladesh was to send 50,000 workers to Malaysia every six months. But in two years, only 7,000 workers were sent under the scheme, according to Bangladeshi labor officials.

"Bangladeshi people didn't find jobs in plantations interesting, so not many applied for it. Malaysia is now opening up all sectors, so we expect a surge in the number of applicants," said Rauf, the overseas workers' ministry official.

"If people can go to Malaysia for a job at a low cost, I think they won't try to risk their lives and suffer making the dangerous boat journey," Chowdhury said.

Currently, there are about 600,000 Bangladeshi workers employed in Malaysia, according to Bangladesh's Bureau of Manpower Export and Training. Overall, there are an estimated 8 million Bangladeshis working abroad, most of them in countries in the Middle East. Bangladeshi migrants send home about US$11 billion each year, which is vital for the economy of the largely agricultural nation.