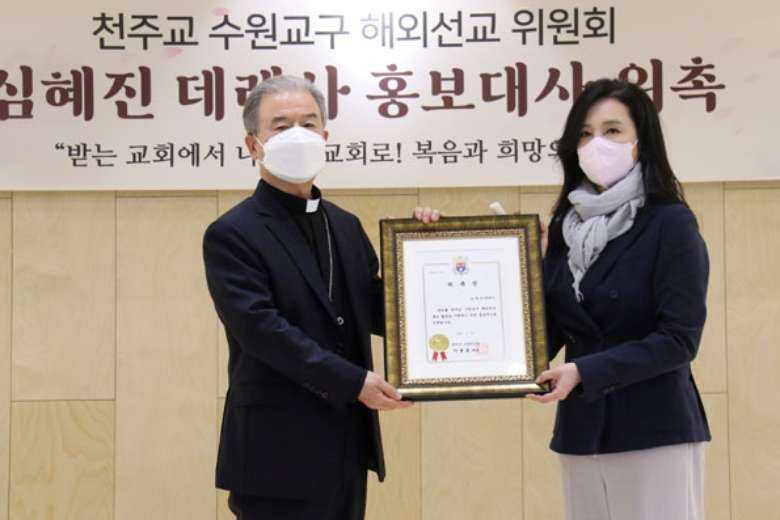 Suwon Diocese in South Korea has appointed a prominent actress as a public relations ambassador to revitalize its overseas mission activities.

Bishop Matthias Ri long-hoon of Suwon appointed actress Theresa Shim Shye-jin for the role and presented the appointment letter at the end of March, Catholic Times of Korea reported on April 10.

This is the first time the Korean Church has officially appointed an ambassador for overseas missions.

Bishop Ri said the collaboration with actress Shim will strengthen the overseas missions and missionaries.

“I am sure that priests in Africa, South America and other places will receive great strength. It will make overseas missionary work of the diocese lively,” the prelate said.

After signing the letter of acceptance, actress Shim said she is proud to be a part of the diocese's overseas missionary work.

The video will tell the stories of people who struggle with poverty, hunger and diseases among various challenges, and how Korean priests work hard to bring comfort to them

“I know well how difficult overseas missionary work is because I have participated in overseas volunteer work,” the 56-year-old actress said.

Shim stepped into showbiz industry as a model in 1980s and shot to stardom with a television commercial for Coca-Cola. She went on to establish herself as a leading actress in drama, film and television in the 1990s.

Among her first responsibilities as ambassador for Suwon Diocese will be her performance in a promotional video that will feature the diocese’s overseas missions to encourage fundraising and sponsorship.

The video will tell the stories of people who struggle with poverty, hunger and diseases among various challenges, and how Korean priests work hard to bring comfort to them.

Father Yu said he believes Shim will be instrumental in spreading understanding of missions among Korean Christians and how they can contribute more generously to missionary activities.

“I hope that through Shim’s ambassadorial activities Catholic believers will be more interested about overseas missions, and they will pray and support more overseas missions and the priests who preach Good News in the difficult environments in the time of Covid-19,” the priest said.

Suwon Diocese began foreign missionary activities in 2004 by sending missionaries to Africa. The diocese now has 23 missionary priests in seven countries, including Peru and Chile in South America and South Sudan and Zambia in Africa.

Some 2,153 individuals and 25 organizations are supporting the overseas missions of Suwon Diocese.