A Good Friday passion play has ended in tragedy. 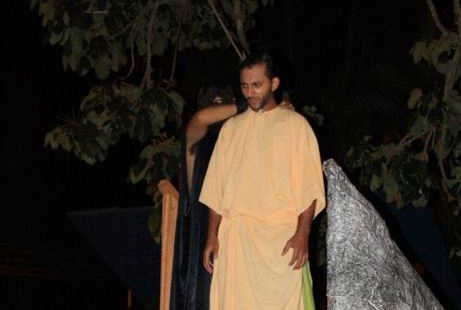 A Brazilian actor died 16 days after accidentally hanging himself on stage, while playing the part of Judas Iscariot. An autopsy on Tiago Klimeck was underway Monday to pinpoint the exact cause of the 27-year-old’s death, Brazilian broadcaster Globo reported. Klimeck took part in an Easter Passion play on Good Friday in the southern city of Itarare. The script required the young actor to appear to commit suicide after his character was overcome with guilt about betraying Jesus Christ. However the special harness he was wearing failed, and strangled him. He was left hanging for around four minutes, with fellow actors at first unaware of his condition. The Daily Mail describes the scene: Mr Klimeck was left dangling for four minutes until horrified performers and spectators realised it wasn’t part of his performance and rushed to his aid. Pictures show the actor taking part in the play before the incident in which he was suffocated. He can then be seen on set hanging from the rope moments before the cast and audience realise a real life tragedy is unfolding. Klimeck, who remained in a coma following the accident on April 6, died Sunday afternoon. Investigators are examining the harness and other safety equipment from the theater. Full Story:Actor playing Judas Iscariot hangs himself by accidentSource:The Blaze