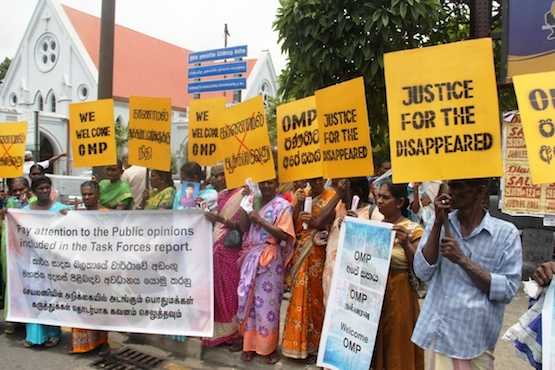 Relatives of the disappeared launched a demonstration to expedite the process of setting up an Office on Missing Persons in Colombo in this file photo. (ucanews.com photo)

Rights activists have welcomed the Sri Lankan government's establishment of the Office of Missing Persons but worry about slow progress. Activists are deeply concerned with the government's progress in realizing key promises to its citizens regarding the search and identification of missing loved ones.

President Maithripala Sirisena signed the Office of Missing Persons Act on July 20 after the law was passed in August 2016. There was a strong outcry from chief Buddhist monks against the act. The monks joined opposition lawmakers in criticizing the act as a betrayal of the military that fought during the three decades civil war.

The act brings Sri Lanka into line with its commitments to the United Nations Human Rights Council, after the country came under sustained pressure from the international community to establish the Office of Missing Persons to promote accountability and reconciliation. Sri Lanka has the second highest number of enforced disappearance in the world.

Catholic rights activist Ruki Fernando said government announcements would be more credible and generate more hope amongst families if some immediate steps were taken before the Office of Missing Persons is operational, such as releasing lists of surrendered fighters and detainees, expediting ongoing court cases of those who disappeared, criminalizing disappearances in Sri Lanka and fast tracking relief measures.

"If and when it is finally operational later this year or next, the Office of Missing Persons does have the potential to discover the fate and whereabouts of some disappeared persons, irrespective of their background and when or where they disappeared," said Fernando.

The Secretary-General of the U.N. Antonio Guterres said the establishment of the office was a significant milestone for those still searching for the truth about their missing loved ones. Guterres said the U.N. was committed to supporting the process and looked forward to the Office of Missing Persons becoming operational as soon as possible.

The National Peace Council, an independent NGO that has worked toward a peaceful Sri Lanka since 1995, welcomed the establishment of the Office of Missing Persons, saying it has the potential to restore civil society's faith in the government.

"We see signs of a new beginning that will bring relief to victims and start the healing process Sri Lanka needs," the council said in a statement.

"The long delay in moving towards operationalizing the law has been extremely painful to all who have been victims and have lost their loved ones during the war and even after the war," the council said.

"The government has said commissioners will be nominated by the Constitutional Council. We have confidence that they will name persons of impeccable character, who have earned themselves reputations for being unbiased and independent," said the statement.

"The visiting U.N. Special Rapporteur on Human Rights Ben Emmerson also reported that draft anti-terror laws prepared by the government to replace the existing Prevention of Terrorism Act will leave unchecked the routine police use of torture to extract confessions," it said.

"We take seriously his observations that 80 percent of those most recently arrested under the terrorism law in late 2016 complained of torture and physical ill-treatment following their arrest."