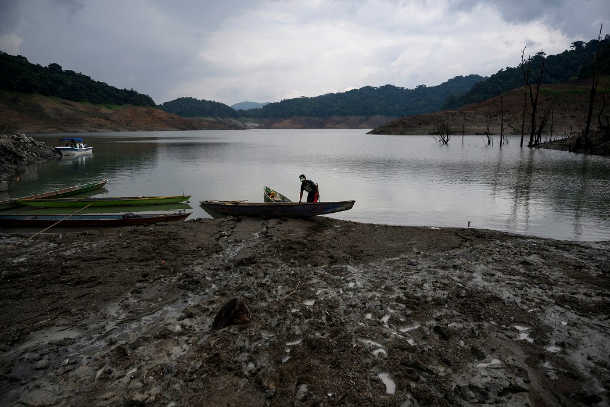 A fisherman of the Dumagat tribe stands in his boat at Angat Dam in Norzagaray in Bulacan. Tribes in the Sierra Madre mountains will be under threat if the government builds a new dam in Quezon province. (Photo: AFP)

Filipino activists have praised a statement by the Philippines' Catholic bishops calling for a stop to the construction of a dam that will reportedly displace hundreds of tribal people.

At least two opposition members in Congress thanked the bishops, saying their statement was "very welcome."

"The project will destroy the lives of [tribal people] in the area, devastate the environment and even surrender our sovereignty to China," said Representative Carlos Isagani Zarate of the Bayan Muna Party.

"We strongly urge the administration [of President Rodrigo Duterte] to seriously heed the call of the [bishops]," said the legislator.

In a pastoral statement titled "I Look Up to the Mountains" issued on Feb. 26, the Catholic bishops' conference called for a stop to construction of the controversial Kaliwa Dam in Quezon province.

The prelates said the project is destructive to nature and would cost the government a lot of money.

"For the sake of the common good, we strongly recommend that ecologically sustainable alternatives be carefully considered," read the bishops' statement.

The US$226.4-million project in Quezon province, south of Manila, has been in the pipeline for three decades.

Expected to be completed by 2023 if started this year, the dam is supposed to complement an existing one that supplies 96 percent of Manila’s water needs.

Tribal leader Eufemia Cullamat, who also represents Bayan Muna in the House of Representatives, assured the bishops that the tribal community will continue to take care of the mountains.

"The Dumagat at Remontado tribes have for years ensured the cleanliness of the water that flows in the river to the communities downstream," said Cullamat.

She said there were ways to ensure that the capital Manila will have enough water without building the dam.

In their statement, the Catholic bishops also said there were other alternatives that were less destructive to nature and less expensive to provide water to Metro Manila.

The church leaders also assured that they were not against development as long as it did not sacrifice the "common good" in the name of progress.

"The ongoing Kaliwa Dam project of the government, in the guise of providing water to Metro Manila, is to our mind against inclusive development," read the bishops' statement.

They said it would destroy biodiversity in the Sierra Madre mountains, displace tribal people and that the contract with the Chinese investors was onerous to the Filipino people

"For the sake of the common good, we strongly recommend that ecologically sustainable alternatives be carefully considered, as proposed by experts in responding to the challenges of the water crisis in Metro Manila," said the bishops.

A US$235.9 million loan from China will underwrite the project.

"It must be reiterated that the onerous and disadvantageous provisions of the Kaliwa Dam China loan agreement are very apparent on its face and they cannot simply be ignored," said Zarate from the Bayan Muna Party.

He noted that the loan agreement was only revealed following a public outcry over transparency and accountability.

On May 9, 2019, several political parties and activist groups filed a petition with the Supreme Court questioning the constitutionality of the loan agreement between China and the Philippines.