A Sri Lankan civil rights activist holds up a placard during a demonstration amid the ongoing political crisis in the country as rain falls in Colombo on Nov. 19. Sri Lanka's parliament was adjourned after just five minutes on Nov. 19 after opening for the first time since MPs brawled and threw objects at each other one week earlier. (Photo by Ishara S. Kodikara/AFP)

Activists in Sri Lanka have urged President Maithripala Sirisena to uphold the rule of law and respect the spirit of democracy as the nation's weeks-long power struggle drags on for a fourth week.

The three figures at the heart of the ongoing political stalemate – the president and two rival prime ministers, Mahinda Rajapaksa and recently deposed Ranil Wickremesinghe — emerged from their first direct talks in the wake of the debacle on Nov. 18 with no progress made, according to reports.

Sirisena convened the meeting as a last-ditch attempt to restore a sense of normalcy after Rajapaksa, the man he has picked to replace Wickremesinghe, faced several no-confidence motions in parliament.

Two days earlier on Nov. 16 lawmakers approved a second vote of no confidence in Rajapaksa, a former president who has been accused of graft and human rights abuses.

Sirisena again refused to accept the validity of the motion.

This led to chaotic scenes in parliament, with supporters of Rajapaksa throwing chili powder mixed with water at their rivals, and using chairs and other objects to try and block the proceedings.

Parliament convened for a short time on Nov. 19 and was adjourned until Nov. 23.

The constitutional crisis began on Oct. 26 when Sirisena sacked Wickremesinghe, his coalition partner, and appointed ex-president Rajapaksa as his successor.

Wickremesinghe refused to step down, calling the move unconstitutional. The president responded by suspending parliament on Nov. 9 and calling for a general election.

But the Supreme Court blocked the move on Nov. 13 after civic rights activists and several political parties sought a judicial review to be resolved in December. 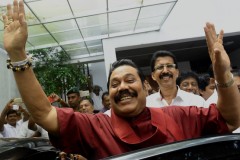 The court gave an interim order to halt the general election called by the president. It also requested the cancellation of a gazette notification saying the poll would go ahead.

Activists argued the president only has the power to dissolve parliament after four years and six months have elapsed since its first sitting. The case was due to be heard again from Dec. 4-6. The court said it would deliver its final ruling on Dec. 7.

Activists argued the president only has the power to dissolve parliament after four years and six months have elapsed since its first sitting.

The Catholic Lawyers' Guild, based in Colombo Archdiocese, warned parliamentarians that anyone in breach of this protocol would not enjoy its support in future elections.

It also appealed to the honorable members of parliament to behave honorably rather than making a mockery of due political process.

"We invite our leaders to practice the values of truth, justice, respect, dignity and selflessness, values that are cherished all over the world, particularly at a time when the eyes of the world are upon us," the guild said in a statement dated Nov. 19.

Father Noel Dias, chaplain of the Catholic Lawyers' Guild, said the executive and legislative branches should try to act with more restraint and seek a solution based on the aforementioned values.

"Failure to soon resolve the political deadlock will gravely affect the lives of the poor, whose prospects for a brighter tomorrow will be blighted," said Father Dias, attorney-at-law.

Former strongman Rajapaksa, who celebrated his 73rd birthday on Nov. 18, served as a rival candidate to Sirisena, who is now 67, in the country's last general election three years ago.

Asoka Obeyesekere, the executive director at Transparency International Sri Lanka (TISL), recalled with horror the "chili-throwing" episode and said the whole country had watched with dismay as their elected representatives were reduced to thuggish acts and intimidation.

He said it was imperative that all law enforcement agencies retained and exercised their independence, and sent a clear message to those seeking to ride roughshod over the law that such actions would not be tolerated.

"We are mindful that complacency on the part of law enforcement agencies could cause irreparable harm to the public's faith in the rule of law and the institutions of democracy," Obeyesekere said.

The TISL called on Sirisena, the Speaker of the House, the chief whip, party leaders and other members of parliament to ensure steps were taken to hold offenders to account and deter others from engaging in such behavior.

Anglican Bishop Dhiloraj R. Canagasabey of the Church of Ceylon described Sirisena's actions as "arbitrary" and said they look like a direct and blatant violation of the constitution.

"The intellectual dishonesty and moral bankruptcy of many of our politicians, and especially that of senior politicians of the two major parties, is a terrible indictment on the quality of leadership that we have produced in out post-independence country," he said.

"The events of the past few weeks have been utterly shameful and have sullied the name of our country internationally. At a time of economic difficulty, the administration has been further paralyzed and the attention of the country diverted to shallow politicking," he said.

"We call on the president once again to rise above seeking petty political advantages and to abide by the very solemn promises he made on more than one occasion to uphold the rule of law, good governance and to respect the true spirit of democracy as well as his obligation to ensure that the constitution is respected and upheld," Bishop Canagasabey added.