Activists call on Indonesia to open Papua to journalists 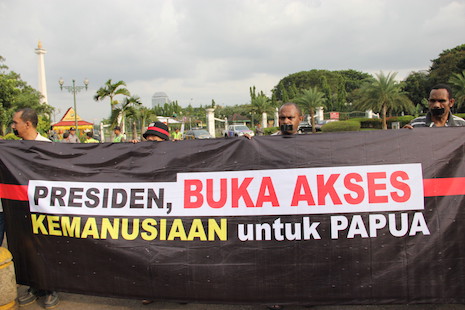 Dozens of activists from different NGOs staged “a silent rally” in front of the Presidential Palace in Jakarta on Wednesday afternoon, urging President Joko Widodo to open Papua to foreign journalists, who have faced difficulty reporting on the embattled region for half a century.

Sealing their mouths with black tape to symbolize the absence of freedom of expression in the region, the protesters — representing the Commission for the Disappeared and Victims of Violence (KontraS), Institute for Policy Research and Advocacy (ELSAM), National Papuan Solidarity (NAPAS), and Papua Itu Kita — held a banner reading “Presiden, Buka Akses Kemanusiaan untuk Papua” (President, Open Access to Humanity for Papua).

“The media blackout in Papua denies the Papuan people’s right to have their voices heard and allows human rights violations such as killings, torture and arbitrary arrests to continue with impunity,” Zely Ariane, coordinator of NAPAS, told ucanews.com during the rally.

Similar rallies were organized simultaneously in 20 cities across the world. The UK-based TAPOL, an organization campaigning for human rights, peace and democracy in Indonesia, coordinated the rallies.

In its statement issued on the same day, TAPOL said that for more than 50 years, access for foreign journalists seeking to report on Papua has been severely restricted.

“Those who have entered Papua on tourist visas have been deported, arrested and even imprisoned. Just last year, two French journalists were sentenced to 11 weeks in detention under immigration charges,” the organization said.

Thomas Charles Dandois and Valentine Bourrat were arrested on August 7 last year at a hotel in Wamena district with three suspected members of the Free Papua Movement. They were working for the Franco-German television channel Arte.

Andreas Harsono, an Indonesia researcher at the New York-based Human Rights Watch, noted that the blackout “is against the 1999 Press Law”.

According to TAPOL, the de-facto ban on foreign journalists as well as NGOs and humanitarian organizations has contributed to the isolation of local journalists and made independent investigation and corroboration virtually impossible.

“It is extremely difficult to hold perpetrators of human rights violations to account, allowing them to continue to act with impunity,” the organization said.

Viktor Mambor, who heads the Jayapura branch of Alliance of Independence Journalists (AJI), added that in recent years journalists from the Czech Republic, France and the Netherlands have been deported for reporting on peaceful political events in Papua.

Many foreign journalists use tourist visas because of the stringent visa application process, which involves the unanimous approval of 18 separate government agencies known as the Clearing House Committee.

“What is actually the main reason why this state treats us differently? We are repressed. It’s different from other regions in Indonesia.”