Despite the 1997 Peace Accord, the Chittagong Hill Tracts lack peace amid frequent sectarian and political violence 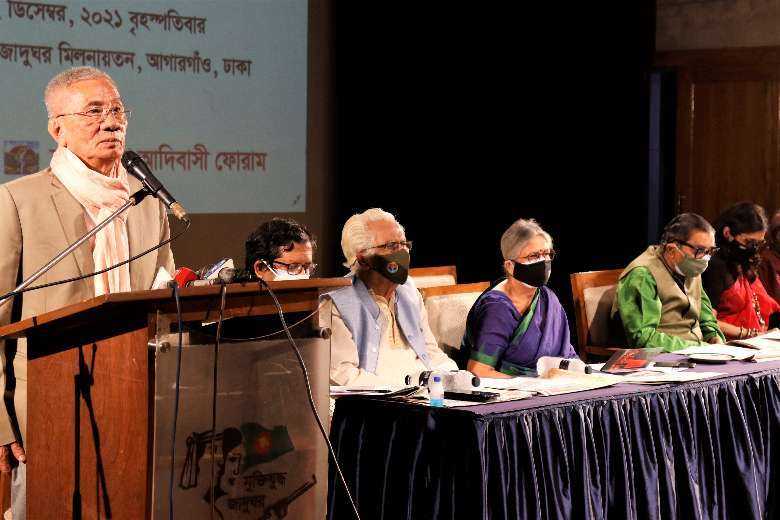 Jyotirindra Bodhipriya Larma, alias Santu Larma, an ethnic Chakma Buddhist and politician, speaks during a program in Bangladesh's capital Dhaka to mark the 24th anniversary of the CHT Peace Accord on Dec. 2. (Photo: UCA News)

Rights activists, political leaders and a church official have called for an end to the Bangladesh government’s failure to implement an accord for peace, justice and development in a restive hilly region.

The call was made as political and social organizations marked the 24th anniversary of the signing of the Chittagong Hill Tracts (CHT) Peace Accord on Dec. 2.

The 1997 accord between the ruling Awami League government and Parbatya Chattagram Jana Samhati Samity (United Peoples Party of the CHT or PCJSS) brought an end to more than two decades of deadly insurgency that claimed hundreds of lives.

PCJSS chairman Jyotirindra Bodhipriya Larma, popularly known as Santu Larma, an ethnic Chakma Buddhist who signed the agreement, alleged that the government was not sincere about fulfilling promises made in the accord.

“More than two decades have passed, but the hopes and aspirations of indigenous peoples on the hills remain neglected. The government should take the blame for the lack of hope and peace on the hills,” Larma, 77, said during a gathering to mark the anniversary in capital Dhaka.

The politician who once commanded dreaded militia group Shanti Bahini, the armed wing of the PCJSS, said the main points of the accord including regional autonomy, land dispute resolution and withdrawal of military camps are far from reality.

“Although the government promised that it would gradually withdraw all army camps from the hills, today the three hill districts have become prisons and cantonments. It is the most heavily militarized zone in Bangladesh,” Larma said.

Rights activists say that despite the CHT being the home of ethnic groups, they are gradually becoming a minority in their own land due to a state-sponsored influx of Bengali Muslims who encroached on the land and livelihoods of indigenous communities.

Kajal Debnath, a presidium member of the Bangladesh Hindu, Buddhist and Christian Unity Council, said the proportion of ethnic tribal people has decreased to 48 percent today from 98 percent in 1971 when Bangladesh gained independence from Pakistan.

“The government says it is implementing UN sustainable development goals so that no one is left behind. How can it explain the decline of tribal people on the CHT? We can only wait to see the government admit the number of Bengalis on the hills is more than that of indigenous people,” said Debnath, a Hindu.

A Catholic official based on the hills echoed similar sentiments.

“Had the peace accord been implemented with sincerity, there could be peace and development on the hills, and there would be no criticism from various quarters,” the official told UCA News on condition of anonymity.

The lack of peace and outbreaks of sectarian and political violence on regular intervals pose a major challenge for the Church on the hills where it has been active since the 1970s, the official said.

The CHT, covering three hill districts — Bandarban, Rangamati and Khagrachhari — is Bangladesh’s only mountainous region and a strategic area bordered by India and Myanmar. The region, famed for natural beauty including smoky hills, natural springs and lakes, is home to more than a dozen tribal groups, mostly Buddhists with some Christians and animists.

Since 1970s, amid concerns over a bubbling insurgency for secession, the government started population transfer schemes leading to an influx of thousands of poor Bengali Muslims, who started grabbing land and livelihoods of tribal communities.

Disgruntled tribal people formed a militia and started attacking Bengali settlers. In response, the government deployed the military, leading to decades of brutal bush war until the peace accord was signed.

The divide-and-rule policy continues. The government signed the agreement on one hand and created an opposition party to keep the unrest alive

A group of anti-accord tribal people termed the deal a sham and formed another political party, the United People’s Democratic Front (UPDF). It became a major adversary of the PCJSS, with them attacking each other to keep their dominance.

Larma blames the administration for backing the UPDF to thwart the peace process and legitimize military presence on the hills.

“The divide-and-rule policy continues. The government signed the agreement on one hand and created an opposition party to keep the unrest alive,” he alleged.

Officials of the CHT Affairs Ministry, which oversees the region, claim there is no lack of sincerity to implement the accord.

The ministry’s deputy secretary Sajal Kanti Banik said the ministry was working hard to implement the agreement but declined to comment further.

According to the 2011 census, the population of the CHT was estimated at 1.6 million with about 54 percent belonging to ethnic groups.

About two-thirds of about 32,000 Catholics in Chittagong Archdiocese hail from ethnic hill tribes.