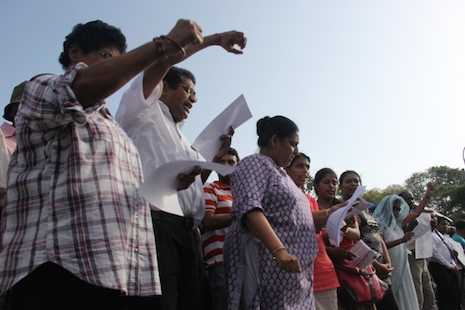 Civil society groups and activists on Thursday burned copies of a notice issued by the Sri Lankan government that warned nongovernmental organizations from engaging in activities the government deemed outside the groups' mandate.

Protesters carried banners and chanted slogans against the government during the rally, which took place in front of the Fort Railway Station in the capital city Colombo.

“The government has violated the fundamental principles of a democratic society and the rule of law,” said Paikiasothy Saravanamuttu, executive director of the Center for Policy Alternatives.

“This is an attempt to repress nongovernmental organizations and silence an alternative public opinion of the people,” he told ucanews.com.

The Sri Lankan government on July 1 warned civil society groups not to engage in activities outside their mandate, specifically citing press conferences, journalism training and workshops as activities to avoid. More than 1,400 NGOs received notices from the government.

Civil society groups strongly condemned the government notice, saying it was unconstitutional and violated basic rights of freedom of speech and expression.

“Civil society plays a vital role in supporting the democratic process in a country and it should be permitted to operate free from interference by the government,” Saravanamuttu said.

Brito Fernando, co-convener of Platform for Freedom, said the warning was a “clear violation of the Sri Lankan Constitution,” which guarantees freedom of speech, expression and assembly.

“We burn this government statement and urge respect for the fundamental rights of freedom of expression and association,” Fernando said.

Protester A K Ariyawathi said that after decades of civil war, the Sri Lankan government should be encouraging the development of civil society.

“Even after 30 years of war, the government still creates fear in the psyche of civilians. They should create a positive environment to engage in civil society work,” she said.

Prime Minister D M Jayaratne told parliament on July 11 that the government was not seeking to control NGO activities but was reminding the organizations to adhere to the principles it agreed to follow at its formation.

Both the United States and Canada had criticized the Sri Lankan government, with the US State Department saying the order “undermines Sri Lanka's longstanding and proud democratic traditions, including freedom of speech and freedom of assembly”.