Jolo suicide bombers who killed 15 were the wives of dead terrorists, military says 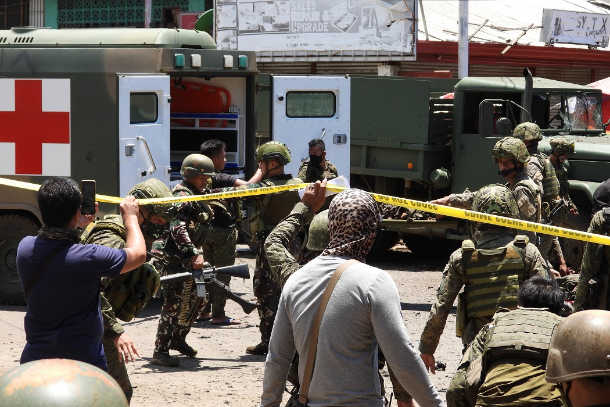 Soldiers stretcher away some of the victims of twin suicide bombings in the southern Philippine city of Jolo on Aug. 24. (Photo: Nickee Butlangan/AFP)

The Abu Sayyaf jihadist group has claimed responsibility for twin suicide bombings near a cathedral in the southern Philippine city of Jolo on Aug. 24 that killed at least 15 people and injured dozens of others.

It was initially thought the first bomb had been hidden in a motorcycle.

Among the casualties were seven soldiers, six civilians and a policeman, while almost 80 others were wounded in the capital of mainly Muslim Sulu province in the far south of the country.

The province is a known stronghold of the Abu Sayyaf militant group.

Bishop Charlie Inzon of the Vicariate Apostolic of Jolo said he received news of the attack with “deep grief and sorrow.”

“We have lost brothers, sisters and friends, and we are in deep grief and sorrow. We are one with their families in this difficult time, for they were also a family to us,” he said.

“They have died as martyrs witnessing to their Christian faith as they braved to stay in Jolo despite constant intimidation and risks.”

Bishop Inzon condemned the attack, saying it was “treacherous, inhuman and an evil act of violence.”

“Such a barbaric deed has no place in a civilized society where the sacredness of life and human dignity is respected,” he added.

The prelate called on authorities to bring immediate justice to the victims and their families.

The Philippine office of the Aid to the Church in Need (ACN), a papal charity organization, condemned the “inhumanity” of the bombers, saying there was no justification for such violence.

“Those responsible for these atrocities are cruel and ruthless, devoid of any ounce of humanity or respect for life and property,” the ACN said in a statement.

“This crime is even rendered more unconscionable because of the hardships our people are going through during the Covid-19 pandemic.”