Maira Shahbaz, 14, was abducted at gunpoint in April and forcefully converted to Islam before her abductor married her. (Photo: indcatholicnews.com)

A 14-year-old Catholic girl who was ordered by a Pakistani high court to live with her abductor has escaped from captivity and reunited with her family.

Maira Shahbaz was abducted at gunpoint in April and forced to marry a Muslim resident of Faisalabad district of Pakistan’s most populous Punjab province.

In a shocking verdict in August, Lahore High Court ruled that Maira should continue as the wife of Mohamad Nakash as she had willingly converted to Islam and married him.

The girl's family in Faisalabad say Nakash abducted her at gunpoint, forcefully converted her to Islam and married her.

They moved the district court in Faisalabad, which directed that the girl be moved to a shelter home. Nakash, however, challenged the ruling in Lahore High Court, which ruled that the girl would have to move to Nakash's home and live as his wife.

In the latest twist, Maira has managed to escape and reunite with her mother.

“I am 14 years old from Madina Town, Faisalabad. I was abducted and later forced to sign on plain documents, and later I was told that I have accepted Islam and had become a Muslim,” Maira said in a video message.

“They pressurized me and made my video and said they will upload it if I will not do what they say. They also told me that I had married Nakash and there is no way to go back.

“They also threatened me about the safety of my family and relatives. They said they will kill them. But I am thankful to God, Adv. Sumera, my lawyer, Mr. Naveed Jeeva [Christian lawmaker] and Bishop Indrias Iftikhar, who gave me protection. I appeal to the government of Pakistan to please take action in my case and grant me protection.”

Maira, a Gospel singer from Maskeenabad, Madina Town, was abducted by Nakash, who is already married and has two children. He and three Muslim friends kidnapped her at gunpoint on April 26. 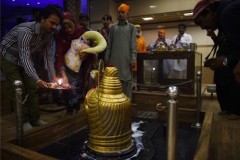 Naveed Jeeva, a Christian member of the National Assembly, told a press conference on Aug. 28 that minorities in Pakistan are in grave danger due to forced conversions. “Such elements make minorities feel insecure,” Jeeva said.

Samson Salamat, chairman of Rawadari Tehreek Pakistan, a group that promotes interfaith harmony, said that Maira’s successful escape and the safe recovery of Mehak Kumari, a Hindu girl from Sindh, is a lesson of hope and strength for the victims of forced religious conversions and forced marriages.

“The safe return of Maira Shahbaz and Mehak Kumari to their parents is a slap in the faces of those who consistently deny forced conversions and declare it an anti-Pakistan agenda rather than accepting the realities,” Salamat said.