Abducted nun released after one week in Congo A Congolese soldier patrols the village of Mwenda in the Democratic Republic of Congo on May 23. Since December 2020, several dozen deadly attacks have taken place at the foot of the Rwenzori Mountains. (Photo: AFP)

A Catholic nun in the Democratic Republic of the Congo has been released by kidnappers after more than a week.

The nun from the Daughters of the Resurrection in the Central African country was seized on July 8 after a visit to the market in Goma, the capital of North Kivu province.

Identified only as Sister Francine, she was “traumatized but physically unharmed,” reported Aid to the Church in Need United Kingdom on July 16.

The group said the kidnappers contacted local church representatives a short time after the abduction.

North Kivu and the other eastern provinces of Congo have suffered attacks from rebel militia groups and criminal gangs.

Regina Lynch, director of projects at Aid to the Church in Need, said: “We are very pleased that Sister Francine is back safe and sound with her community.

The kidnappers have succeeded in instilling fear and terror among the populations. This is a very worrying development

“Unfortunately, we are finding that kidnappings, especially of priests and religious, have become a weapon and a means of pressure in numerous African countries.”

Pointing out that abductions have occurred across sub-Saharan African, Lynch added, “Many priests and religious, such as Gloria Cecilia Narvaez in Mali, often go missing for years. Other church members do not survive the abductions.

“The kidnappers have succeeded in instilling fear and terror among the populations. This is a very worrying development.”

Aid to the Church in Need reported ethnic conflicts, demographic displacement and access to raw materials as some of the factors that characterize the situation in Congo, adding that “over the last few years, the situation has been exacerbated by a powerful radical Islamist element.” 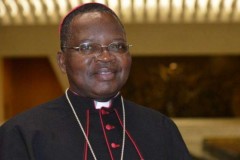 Dozens of armed groups are believed to operate in the eastern region despite the presence of more than 16,000 UN peacekeepers.

Catholic bishops in the country appealed for an end to the bloodshed in April.

“War is the mother of all miseries, it affects all spheres of society and compromises the future of our children,” the bishops said in a statement.

“To those who have taken up arms we say: ‘Stop killing your brothers.’”

The bishops noted that for more than two decades, the eastern part of our country has been particularly affected by armed conflicts and recurrent insecurity, causing death, desolation and displacement of the population.

In eastern Congo, numerous armed groups, and in some cases government security forces, have attacked civilians, killing and wounding many. Some of the worst violence took place in Ituri, where ethnic Lendu-led militia killed hundreds of mostly Hema villagers and forced hundreds of thousands out of their homes, according to a Human Rights Watch report.

The report said the humanitarian situation remained alarming, with 5.5 million people internally displaced. Nearly 930,000 people from Congo were registered as refugees and asylum seekers in at least 20 countries as of November.