Future canonization of a favorite nun, persecution, violence main highlights for the church in 2015 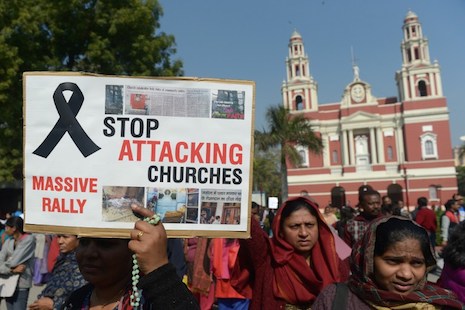 The year 2015 saw cases of persecution against Christians, including the rape of two nuns, with no concrete action taken against the perpetrators, but ended on a celebratory note with the pope clearing Mother Teresa's path to sainthood.

Pope Francis authorized the Congregation for the Causes of Saints to proclaim the decree concerning a miracle attributed to the intercession of Blessed Mother Teresa.

The second miracle that cleared her path for sainthood was the recovery of a Brazilian man from multiple brain tumors.

Blessed Teresa's canonization is expected in September to coincide with the anniversary of her death.

The year started with police ruthlessly dragging priests, nuns and laity into buses for protesting in February against persecution of Christians in the national capital New Delhi.

According to Delhi archdiocesan spokesman Father Savari Muthu Shankar, the police "did not even spare the women or the elderly."

"They were even kicking people who fell down to the ground during the crackdown," he said.

As incidents of attacks on churches and pastors were pouring in across the country, an elderly nun was raped in the eastern West Bengal state in March.

Another nun, a Salesian from Raipur in the western Indian state of Chhattisgarh, was raped after two masked men broke into her room and tied her up.

Christian leaders have consistently blamed these attacks on religious hard-liners, who are said to have become emboldened since the pro-Hindu Bhartiya Janata Party (BJP, or Indian People's Party) and Prime Minister Narendra Modi came to power in May 2014.

Modi has been heavily criticized for not speaking out against religious violence and also has faced flak for remaining silent about a spate of mass re-conversions of Christians and Muslims to Hinduism.

According to media reports, the BJP government has strengthened extremist Hindu groups who want to make India a Hindu-nation. There have been scores of re-conversion events in the past year spearheaded by the World Council of Hindus.

In June, rights and civil society groups released a document on the first anniversary of Modi's victory, highlighting the increase in persecution of Christians and Muslims since the election.

According to the report, there were more than 200 cases of persecution against Christians, more than 170 against Muslims and more than 230 incidents of hate speech over the last year in India. Most of the cases occurred in states under BJP rule.

The BJP is considered the political wing of the RSS.

In the western Indian state of Chhattisgarh, Christian clergy have been barred from entering several villages in Baster district, due to a local law. The district has seen increasing anti-Christian violence for nearly a year after some Hindu groups sought the ban. An Indian Catholic prays during Mass at Saint Mary's Basilica in Secunderabad, southern India, on Feb. 18. (Photo by Noah Seelam/AFP)

Meanwhile, the church carried on its humanitarian work across the country.

Caritas India, the social arm of the Catholic Church, provided immediate help to the neighboring state of Nepal, which experienced a devastating earthquake in April.

It also brought relief to 24,000 flood-hit people in the southern Indian state of Tamil Nadu during the state's worst floods in decades.

A Caritas India report released in August shows the organization invested US$75 million on 14 major emergencies across the country between 2004-15.

It also witnessed a surge in local donors.

"Our international donors have been declining so we've had to intensify our efforts for more funding from within India," Father Frederick D'souza, executive director of Caritas India, had said.

Father D'souza said the agency embarked on its own fund-raising campaign rather than rely on collections at diocesan levels.

The Catholic Church took a cue from Pope Francis' encyclical on the environment, "Laudato si'," to observe the annual day for the liberation of Dalits.

"As we take care of nature, we have to take care of the marginalized and oppressed people in our country," Father Devasagaya Raj, secretary of the Indian Catholic bishops' office for Dalits and lower classes, said.

Chetnalaya, the social arm of Delhi Archdiocese, made a list of environmental programs for Catholics to focus on.

On Nov. 22, the feast of Christ the King, roughly 13,000 Catholics in Delhi took a pledge to protect the environment by following five commandments to be implemented in their daily lives, including using energy-efficient light bulbs, reducing car use and composting at home.

On a happy note, Pope Francis this year appointed a new archbishop and six new bishops for dioceses across the country.

However, as the year comes to an end, the federal government assured Christians of justice.

Speaking during a Christmas dinner organized by the Indian bishops' conference, Home Minister Rajnath Singh said that the "government has always been with the Christian community and will always remain with them. There should be no confusion regarding this."