A tale of India's sibling bishops 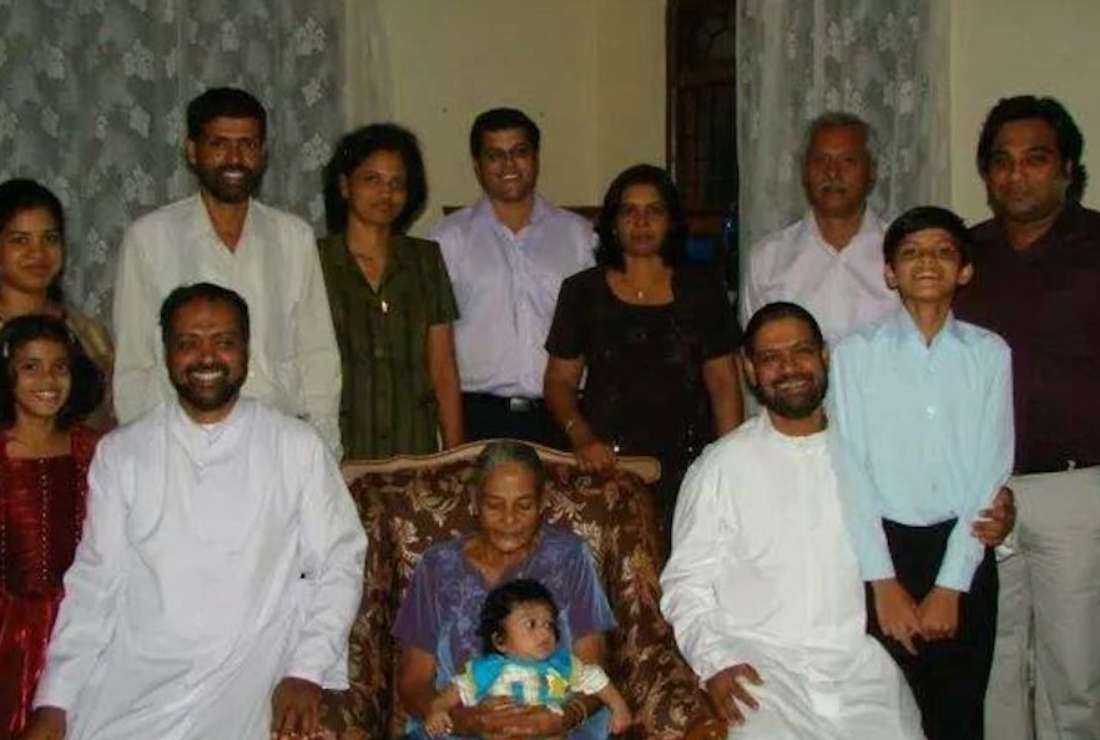 A file photo of the Mascarenhas family with mother, Maria Barreto, seated in the middle, flanked by Bishop Theodore Mascarenhas (right) and Bishop-elect Sebastiao Mascarenhas (left) who are seen in cassocks. (Photo: supplied)

In a second incident of siblings becoming bishops in the history of the Indian Church, Pope Francis on Dec.31 appointed Father Sebastiao Mascarenhas, 63, as bishop of Baroda in the western Indian state of Gujarat.

Eight years ago, his younger brother Theodore Mascarenhas, 62, was appointed auxiliary bishop of Ranchi in the eastern state of Jharkhand by the same pope.

The first siblings to become bishops in India were the late Jesuit Bishop Alphonsus F. D'Souza of Raiganj in West Bengal and his younger brother and former Archbishop Albert D’Souza of Agra in Uttar Pradesh.

“I will take up the new responsibility, the new post as it comes,” Bishop-elect Sebastiao told UCA News.

Both brothers belong to the Society of Missionaries of St. Francis Xavier (popularly known as the Pillar Fathers), an indigenous congregation based in Goa, western India.

Father Sebastiao was all set to take up his new assignment to the Khempur Mission in Ahmedabad Diocese in Gujarat. He was planning to work "at the grassroots level and also do some writing."

In Khempur he was appointed the assistant parish priest and the hostel in charge. "But will be heading to the Baroda diocese,” Father Sebastiao said.

He and his brother bishop have told their family to keep the celebrations simple, in keeping with the teachings of the Pillar Society that works for the poor and the marginalized.

Father Sebastiano also asked the Baroda diocese to the episcopal ordination and installation on Feb. 18 simple ceremonies "because the call t be a bishop is a call to serve the poor, the least and the lost.”

Father Sebastiao said the seed of his priestly vocation was sown in the family life in Camurlim village in south Goa.

Bishop Theodore said he was "not surprised my elder brother was chosen as bishop. He has deep experience of governance and a vision for the Church in India,” said Bishop Theodore, who was secretary general of the Catholic Bishops’ Conference of India (CBCI) from 2016 to 2019.

In his 10-year stint in the Vatican, Bishop Theodore worked under three popes as the head of the department of cultures for Asia, Africa and Oceania at the Pontifical Council for Culture.

Both the brothers attribute their priestly vocation to their mother, Maria Barreto.

“My devout parents created a spiritual ambiance in the family that is prevalent in Goa, and [its neighboring places like] Mangalore and Kerala,” Father Sebastiao said.

“Most of us would accompany our mother on her 10-hour annual walking pilgrimage to Old Goa for the feast of St. Francis Xavier and even camp there in the night and return home the next day by bus,” Maria Dias, 67, a retired banker and eldest sister of Bishop Theodore, said.

So, it was no surprise to the family that the two brothers joined the seminary. Father Sebastiao was the first to join at an early age and needed special permission for his priestly ordination at the age of 24.

Father Sebastiao, a bright student, got a double promotion in primary school and later won a gold medal in economics from Nagpur University in the central state of Maharashtra.

Theodore followed him to the same religious order and was ordained a priest at the age of 27.

“We owe a lot to our mother who instilled in us love of God and the Church and its values,” Bishop Theodore said.

As a child one day, he picked up a plant and brought it home. “My mother asked me about it, and when told that I had not asked the owner for it, she promptly sent me back to return it,” the prelate recalled, saying she was a disciplinarian but extremely loving.

Their mother died just before Father Theodore was appointed a bishop in 2014.

The siblings’ father, Joaquim Mascarenhas, worked in Mumbai, the commercial capital of India, as a cook for the Cricket Club of India, and every month he sent home money to sustain the family.

“We were a joint family. My father and his brother married two sisters and we all lived in the same house, sharing the same meals,” Bishop Theodore said.

He said his father, was offered a promotion. But he declined the offer fearing the new job would force him to "compromise on his Christian principles."

“He told us that the new position would have earned him a good salary but he preferred to continue in his job, earning a humble salary and earning it honestly,” Bishop Theodore said.

The prelate also recalled that the night before he died, his father told them to return Rs 200 (US$2.5) to the man he owed but he never told them how many people owed him money.

Interestingly, both brothers with doctorate degrees are qualified professors of theology.

Bishop Theodore has a doctorate degree in the Sacred Scriptures from the Pontifical Biblical Institute in Rome and Father Sebastiao holds a doctorate in Systematic Theology from the University of Freiburg, Germany.

Father Sebastiao, a polyglot proficient in Gujarati, Hindi, Marathi, English, German, and French, was the provincial superior of the Bombay Province from 2009 to 2012 and superior general of the Society of Missionaries of St Francis Xavier from 2017 to 2022.

“Father Sebastiao has shouldered various roles with a keen sense of responsibility, serenity, and wisdom while dealing with problems and with people,” Cardinal Filipe Neri Ferrão of Goa and Daman said.